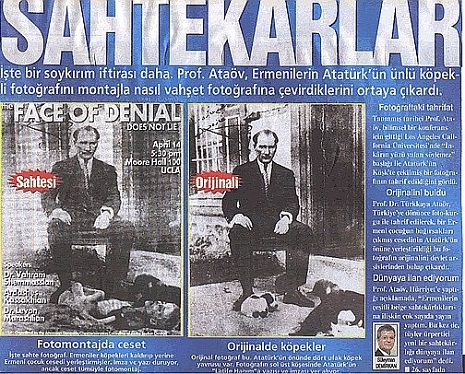 The Armenian diaspora turned the late Turkish leader`s photo into a poster titled "The Face of Denial Does Not Lie." In the original photo there are four little dogs in front of the seat occupied by the leader, whereas the doctored photo replaced the dogs with the dead body of an Armenian child for UCLA (Los Angeles California University) "Genocide" Conference Talk.

The talk was organised by the Armenian Genocide Commemoration Committee and Dr. Vahram Shemmassian, Ardashes Kassakhian, Dr Levon Marashlian were the speakers.

Professor Türkaya Ataov was shocked by the Armenian diaspora`s forgery. He went to the University of California at Los Angeles for an academic conference and saw an altered photo of Ataturk. As soon as he returned to Ankara, Ataov found the original photo after searching state archives and proved the depiction of the Armenian child was used for propaganda.