Garadaghly Massacre through the eyes of witness 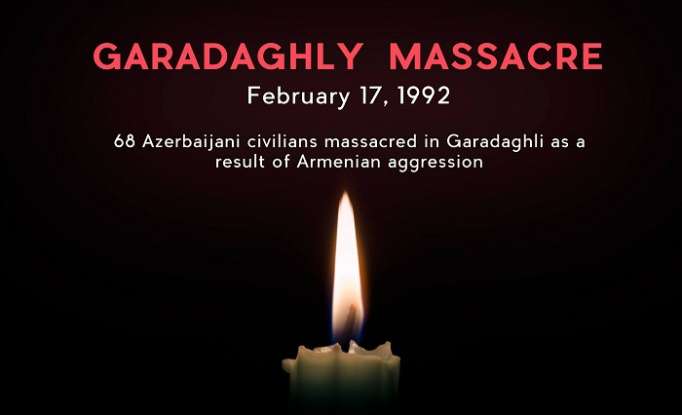 Sabira Mahmudova – one of the bravest female officers of Azerbaijani National Army tells her memories on Garadaghly Massacre committed by Armenian Armed Forces.

In early February, Armenian Armed Forces reattacked the Garadaghly with the help of the 366th Motorized Rifle Regiment. The population could resist the pain. On Jan. 15, they declared, they will fight to the last drop of the blood.

On 10th of February the situation was strained in Garadaghly. Since the summer of 1991 women, children and elderly people had already been evacuated with helicopters.

Mainly 11 mid, le-aged women stayed in the village to serve their husbands, sons and to prepare food for the soldiers.

14 soldiers from Aghdam region of the National Army of Azerbaijan were ready to help the locals, they stayed in Garadaghly till the end. 13 schoolchildren refused to leave the village in order to support their fathers and brothers.

`Black days` of Garadaghly were about to come. On Feb. 14, Armenians reattacked the village. Two of heavy machine guns of Armenians were burned out by grenade launcher. The village gave casualties as well.

Khojaly region were also in a chaos as all were aware of the Garadaghly Massacre.

On 11 February, Armenians carried on attacking. We had serious casualties. The old woman, whose duty was to serve the soldiers, was killed by Armenians. We had already run out of the weapons. In a rough ride, firstly, Armenians captured our unit. We could hear screams from the radio transmitter in Aghdam headquarter. At that moment, Khudu Khuduyev, chairman of the Inspection Commission of Azerbaijan Popular Front Party, commanding officer of the battalion came to the headquarter. He was from Aghdambattalion. Together with 13 soldiers, He went to help Garadaghly. However, they were forced to withdraw by Armenians. I remember, how Khudu Khuduyev burst into tears. (Red. – Sobs her heart out…)

On the 17th day, screams of the Garadaghly people shook the Aghdam headquarter. We had taken the killed and wounded by Armenians to the building of a collective-farm. Having noticed that, we have no weaponry left on, Armenians had attacked the building. They were in bulletproof vests…

We lost 14 of our soldiers. I can still hear the gun sounds and innocent people’s screams…

Armenians tortured our brave men who stood against them for 4 years and fought for 5 days in Garadaghly with their last bullets. Armenians threw 35 wounds to the silo trench while alive. 54 men were taken as hostages. 25 people were shot. One cannot imagine what happened in our headquarter. Even before, armed Armenians attacked the village for several times.

Monte Melkonian, brutal Armenian commander and his group massacred the Garadaghly people. Firstly, Monte was fortified by Armenians to fight in Khojavend. I obtained the information when I served at the Aghdam headquarter till summer 1991-1992. He carried out the Garadaghly massacre (14-17 Feb., 1992) together with the terrorist Manvel Egizoryan, a citizen of a foreign country, a desert commander, the head of ARABO. I learnt from an intelligence agent that the current president, Sarkisian called him back because of the disagreement between the two war criminals – Mekonian and Egizoryan.

I met with Ilhuseyn Huseynov, the minister of the State Security Committee. I expressed my fear saying that the same fate awaited Khojaly. He said in response:`We must not let the Armenian planes land the Khojaly airport. We have to evacuate civil citizens, even by means of passing through the mountain trails.`

I returned back to Aghdam and I hoped that Khojaly will not suffer the same fate with Garadaghly. But in vain...
After 10 days Armenians committed Khojaly Genocide...

Sabira Mahmudova - Head Lieutenant, Chief Instructor on the rights and protection of the Azerbaijani National Army, Regiment N123 Exceptional Services on the formation of Azerbaijani Army.