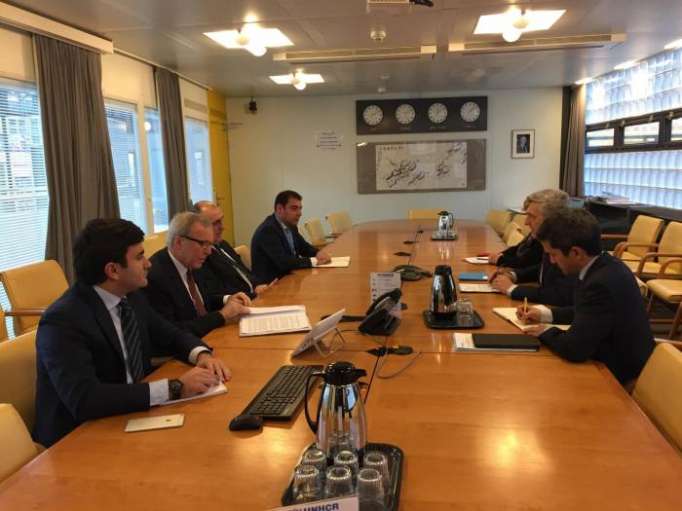 Minister Elmar Mammadyarov said that the humanitarian assistance provided by the UNHCR to the refugees and internally displaced persons of Azerbaijan, as well as the current level of cooperation between the organization and our country is highly appreciated.

At the meeting Minister Elmar Mammadyarov briefed the interlocutor about the reconstruction works carried out in Jojug Marjanli village after the liberation from the occupation of Armenia as well as the measures taken for the return of internally displaced persons in safety. He stressed that the social efforts to improve the living conditions of the refugees and internally displaced persons will further be continued.

Minister Mammadyarov provided detailed information on the current status of the negotiations on resolution of Armenia-Azerbaijan Nagorno-Karabakh conflict. He added that, as it was agreed, the substantive and result oriented talks will be continued after the elections in both countries. Furthermore Elmar Mammadyarov emphasized that in order to change the status quo of occupation the armed forces of Armenia must be withdrawn from the occupied territories of Azerbaijan on the basis of demands of relevant resolutions of UN Security Council.

Minister Elmar Mammadyarov touched on the fact of illegal settlement of ethnic Armenian refugees from Syria into the occupied territories of Azerbaijan by Armenia and stressed the importance of serious attention by the international institutions and the international community on this issue.

F.Grandi expressed his satisfaction with the cooperation between the UNHCR and Azerbaijan and highly appreciated voluntary donations of Azerbaijan to the UNHCR.

During the meeting the sides exchanged views on prospects of cooperation between the UNHCR and Azerbaijan and the current issues on the agenda.