Capital is on its way to America, but for bad reasons - CARTOON 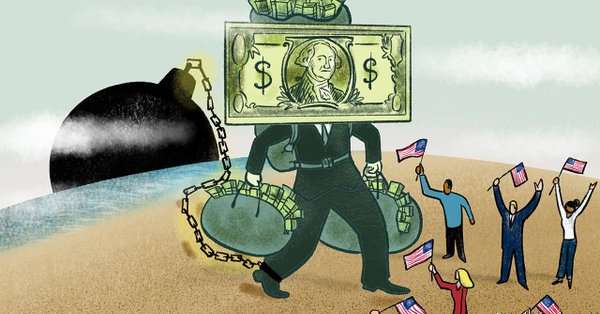 According to President Donald Trump, money is pouring into America from abroad. The tax reform he signed into law in December means American firms can no longer defer paying taxes on profits left sitting in foreign subsidiaries.

The change has led to some uplifting headlines. Apple said that it would make a one-off tax payment of $38bn relating to its past accumulation of $252bn in foreign earnings. Presumably, it will now start to bring this cash home. “Huge win for American workers and the USA!” tweeted Mr Trump. Yet despite the prospect of large-scale profit repatriations, the dollar has been strangely weak of late. Since the start of November, when tax reform began looking likely to pass, the greenback has fallen by about 3%. What is going on?

Start with the fact that repatriations are mostly not true capital inflows. An analysis by Zoltan Pozsar of Credit Suisse finds that, as of March 2017, American corporations had amassed around $2.2trn of earnings in overseas subsidiaries. About half was tied up in illiquid investments such as local firms and factories. Most of the rest—the money that could “come home”—is already in dollar-denominated assets.

Take Apple. In its most recent annual report, it said that its $252bn was “generally based in…dollar-denominated holdings”. According to Mr Pozsar, Apple holds more Treasuries and other government securities than Bank of America does. The same is true of Microsoft. Repatriation makes these funds available for distribution to shareholders, but neither increases demand for dollars nor sharpens the incentive to invest in America. In fact, argues Mr Pozsar, if firms start selling bonds, it could lead to tighter credit.

Even if repatriation is a damp squib, however, America can expect capital inflows in 2018. They will be needed to plug the hole tax cuts have made in the federal budget. Tax reform will increase borrowing by $1.1trn over a decade, according to official projections. In 2019 America’s budget deficit may surpass $1trn, or 5% of GDP. Someone must lend the government this money. American households are unlikely to do so. In December the personal-savings rate was just 2.4%. So the government will probably borrow more from abroad. In other words, the current-account deficit, as well as the fiscal deficit, will rise.

The implication for the dollar of these “twin deficits” is ambiguous, says Zach Pandl of Goldman Sachs. Should the Federal Reserve raise interest rates to stop tax cuts from overheating the economy, America’s bonds will automatically become more attractive to foreigners. The dollar should rise as investors take advantage of higher returns, as when Ronald Reagan cut taxes in the 1980s. Alternatively, foreigners might be enticed to buy American bonds by the prospect of a cheap currency with room to rise. So if the Fed refrains from tightening in response to the fiscal stimulus, the need for more external financing could explain a cheaper greenback today.

The current value of the dollar seems to reflect a mix of both effects, says Brad Setser of the Council on Foreign Relations, a think-tank. Good economic news elsewhere, particularly in Europe, has made investors think twice about where to park their funds. Yet the dollar remains relatively strong by the standards of the past decade, reflecting America’s higher interest rates. On February 27th Jerome Powell, the Fed’s new chairman, told Congress that the outlook for the economy had strengthened since December, in part because of the fiscal stimulus. Markets took this as a sign that the Fed might raise interest rates four times in 2018, rather than three, as previously expected, and the dollar rose.

Capital inflows are awkward for Mr Trump. He has promised to cut America’s trade deficit, which, as a matter of national accounting, goes hand in hand with borrowing from abroad. His best hope is thatgrowth and more domestic saving keep the twin deficits down, at least as a share of GDP. If not, capital flooding into America may not be something he should cheer.

This article appeared in the Finance and economics section of the print edition of the Economist under the headline"Green-back".