`Construction of such grandiose hotels demonstrates power of Azerbaijan` 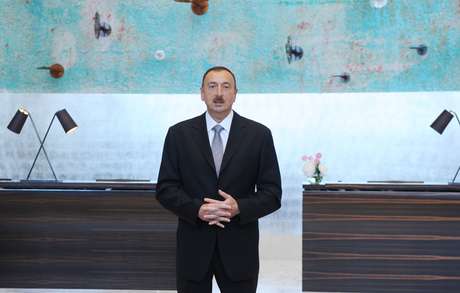 The opening of Fairmont Baku hotel in Flame Towers complex was held on 24 June. The opening ceremony was attended by President of Azerbaijan Ilham Aliyev and his spouse Mehriban Aliyeva.

The Head of State cut the ribbon symbolizing the opening of the Fairmont Baku hotel.

After getting acquainted with the conditions created in the Fairmont Baku, the President met with the staff of the hotel.

"Once again I welcome you. It has been an hour that I have been acquainted with the hotel. Fairmont is, in the true sense of the word, grandiose. It is the largest, most modern hotel of Baku, Azerbaijan, the conditions created here are at the highest level. Personally, I have not seen a more beautiful, grand hotel than this one.

I remember I personally attended the opening of each hotel. Each time the opening of a new hotel makes me very happy. Because these are investments made in our city, it is the development of our city, Baku, which is even more beautiful. Baku is a really beautiful city. However, new hotels make our city even more beautiful. Today Baku accounts for all famous hotel brands. Kempinski, Hilton, Jumeirah, Marriott, Four Seasons and Fairmont hotels have been opened over the past two years. This is a good indicator. It shows the development of our country. It shows the direction of investments in Azerbaijan. It shows investors` faith in the present and the future of Azerbaijan. In short, our country is developing.

Construction of such grand, fine hotels demonstrates the power of Azerbaijan. Because the development of our country proceeds in multiple vectors. Non-oil sector is developing successfully. For five months of the current year, non-oil sector in Azerbaijan increased by 11 percent. I think this is the highest rate in the world.

Of course, the construction of hotels is a manifestation of common processes in the country, because if it were not for the overall development, Azerbaijan would have not turned into one of the world centers, there would be no need for the construction of these hotels. Of course, I highly appreciate the activities of investors. I also greet the most famous hotel brands of the world and express our appreciation for the fact that they start their activities in Azerbaijan. I am confident that their work will be successful. Because, once again I want to say that Baku is today one of the world centers of both a political and an economic and cultural point of views. Baku hosts representative international events almost every week. Thus, probably, there will be the need for construction of new hotels.

The Fairmont hotel is really grandiose. The interior design is fascinating. Everything has been designed with a great taste. Everything is designed for the guest convenience. Lovely rooms, spacious public areas, the conference center, recreation areas, a very beautiful design.

Of course, the appearance of the hotel is grandiose too. The Fairmont hotel and Flame Towers are the new symbols of Baku. Our Baku has ancient symbols, and we are rightly proud of them. "Maiden Tower" is the symbol of Baku, Icherisheher is a unique architectural monument. Boulevard has been functioning for more than 100 years. All these are the ancient symbols of Baku.

New symbols of Baku have been created in period of independence. Among them I can mention the Heydar Aliyev Center. The Heydar Aliyev Center can be seen from the upper floors. This is also a unique piece of architecture that has no analogues in the world. The flag square is a symbol of our modern state. The grand size of the flag reflects the independence of Azerbaijan, and it also has no analogues in the world. The new boulevard, I believe, is the new symbol of Baku. Other buildings embody our modern city, and the Flame Tower, of course, occupies a special place among them. It is no accident that today at various international events of Azerbaijan abroad "Flame Towers" are shown as symbols. This is truly a unique piece of architecture, which has no analogues in the world, and it is built in one of the most beautiful places of the city with great taste and great love. Of course, the opening of the Fairmont Hotel makes me happy. Because the Fairmont hotel group is one of the most advanced in the world, and I am sure that Azerbaijan will ensure the success of this hotel.

The opening of this hotel at the same time will give an impetus to the development of the tourism sector. I am confident that tourists will come to stay here, to see this place. Because the Flame Towers are today the well-known architectural monument in the world. I am sure that many will express willingness to stay here.
Tourism is developing rapidly in Azerbaijan. The number of tourists is growing every year. I am glad that resorts are opened not only in Baku but also in other places, including "Shahdagh” open complex. Five hotels will already operate there this winter season. That is, it shows the overall development of our country. Our country is developing rapidly. All areas, including construction and tourism, are developing. Once again I want to say that the construction and opening of such grand buildings, hotels is a manifestation of the overall development of our country.

I`m sure that you, the personnel of this hotel will give guests a good service. I am sure that you will support, will contribute to the development of the country. I have no doubt that the guests here will be surrounded by care, attention, will enjoy a panorama opening here and the created conditions. Once again, I congratulate you and wish you success”.