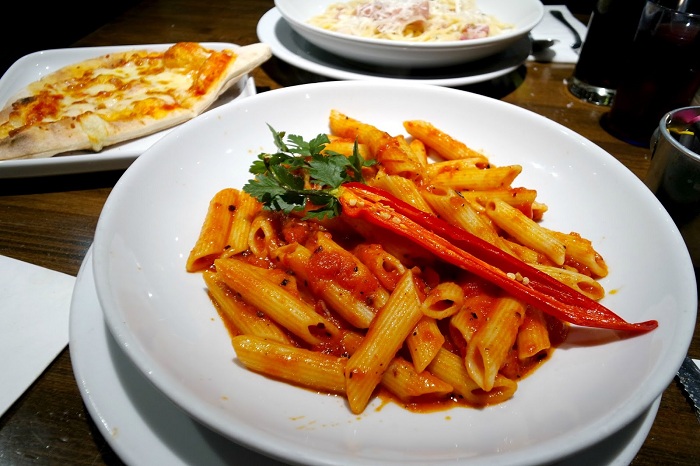 A new study by researchers at St. Michael’s Hospital in Toronto suggests that eating pasta is correlated with weight loss. Many people steer clear of the Italian staple for fear of ingesting too many carbs, but according to new findings published by BMJ Journals, eating pasta might actually help people shed a few pounds.

For 12 weeks, scientists monitored participants’ weight, body mass index, fat, and waist circumference while feeding them a half-cup of pasta three times each week. At the end of the trial, everyone lost half a kilogram on average (roughly one pound), leading researchers to conclude that pasta and other foods that rank low on the glycemic index (GI) scale do not contribute to weight gain or increased fat levels. Other eats low on the GI scale — which measures the effect foods have on blood sugar levels — include sweet potatoes, pumpernickel bread, corn, lentils, and non-starchy vegetables.

But you might not want to rush to the pasta aisle just yet. Haley Hughes, a registered dietitian and certified diabetes instructor who holds a master’s degree in dietetics, told us that while eating pasta in moderation can be part of a balanced diet, due to the small portion sizes used in the study, it’s not an accurate representation of the amount of food people actually eat.

“In this study, participants consumed a serving of about a half cup of pasta three times a week, which does not provide enough evidence to claim pasta promotes weight loss,” Hughes told The Daily Meal. “Portion control is definitely a key factor, and other areas should be considered including what else they are eating, activity level, individual nutrition needs, etc. Three servings of a half cup of pasta a week is a very controlled portion size and typically the average American has much more than that.

“I mean, look at your plate next spaghetti night,” Hughes added as an example. “Half of a cup isn’t going to get you very far.”

Hughes says that controlling carbohydrate portions can be a strategy for sustainable weight loss, adding that there’s no “one size fits all” standard for pasta servings or for carbohydrates in general. She recommends following MyPlate guidelines — provided by the United States Department of Agriculture — in which non-starchy vegetables take up half of a standard plate alongside three or four ounces of protein and a quarter-plate serving of carbohydrates.

“I personally try to add lean ground meat and veggies to my pasta sauce and include a vegetable side on spaghetti night to prevent overdoing it on my pasta serving,” Hughes said. “It's all about balance!”

Eating pasta might not be a direct solution to losing weight, but eating foods high in carbohydrates doesn’t necessarily mean you’ll gain it either. Several studies suggest that eating an excess of foods such as bread, pasta, and dairy will pack on the pounds, but there’s nothing especially fattening about carbs. For more on this topic, here’s every question you’ve ever had about carbs, answered.

Read the original article on thedailymeal.com.