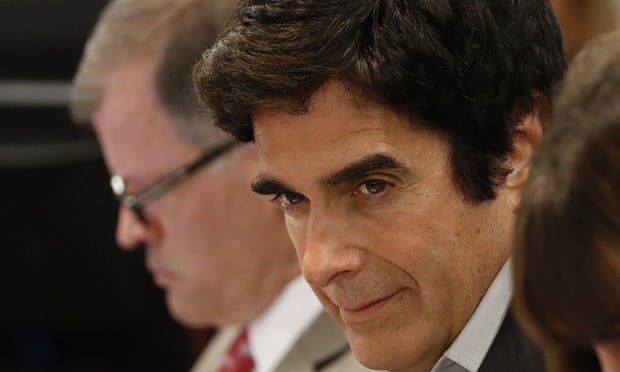 Jurors got a rare behind-the-scenes look at a David Copperfield disappearing act during testimony in a negligence lawsuit involving a British man who claims he was badly hurt when he fell while participating in a 2013 Las Vegas show.

The magician’s friend and executive producer, Chris Kenner, revealed to jurors the mystery behind a signature Copperfield illusion that appeared to make about a dozen audience members vanish together onstage.

Stagehands with flashlights hurried randomly chosen participants through dark curtains, down unfamiliar passageways, around corners, outdoors, indoors and through an MGM Grand resort kitchen in time to re-enter the back of the theatre for their “reappearance” during the show finale, Kenner testified.

“Is that route an obstacle course?” asked Benedict Morelli, attorney for Gavin Cox of Kent, England, who claims lasting brain and bodily injuries from his fall have cost him more than $400,000 in medical care.

No, answered Kenner, whose company, Backstage Employment and Referral Inc, is also a defendant in the case.

Morelli asked Kenner whether stagehands and Copperfield visually assessed the physical fitness and footwear of audience members randomly picked to participate in the trick dubbed “the runaround”.

Magicians, media members and lawyers were disqualified to protect the secrecy of the trick that Kenner estimated Copperfield performed tens of thousands of times over 20 years.

“At no time are they told what they’re going to do before they start this illusion,” Morelli asked Kenner. “They’re told as they’re running the route, correct?” Yes, Kenner replied.

Kenner declined to say it was dangerous to lead people along a dark and unknown route over changing floor surfaces of linoleum, cement, carpet, sidewalk and tile. The lawyer noted that before Cox fell, the group hustled through an alley coated with what Morelli called construction dust.

Popovich told the jury of eight women and four men last week that 10 minutes before Cox fell, Copperfield safely walked through that same area as part of another illusion that did not involve audience participation. The MGM Grand lawyer said Copperfield would have alerted stagehands if he noticed any problems along the way.

Cox and his wife, Minh-Hahn Cox, are seeking unspecified damages in the negligence lawsuit.