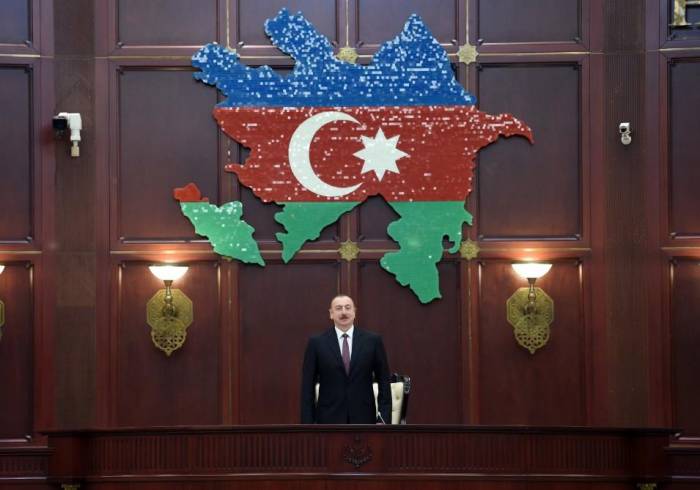 The Jojug Marjanli village has become a symbol of our revival, Azerbaijan’s President Ilham Aliyev said during his inauguration ceremony on April 18, AzVision.az reports.

“A new life that began in Jojug Marjanli rejoices every Azerbaijani citizen,” the head of state said.

The Azerbaijani president also touched upon the army building carried out in the country.

“In some cases, we are criticized for spending so many funds on army building. However, life has showed that we pursued the right policy,” he said.

Today, the Azerbaijani army is among the world’s most powerful armies in terms of arms supply and combat capabilities, President Aliyev stressed.

“We provide our army with whatever is needed. We purchase the most modern weapons and we will continue to do so. The enemy also saw the strength of our army. The April fighting is our glorious history, our great victory. The Azerbaijani army freed a part of the Aghdere, Fuzuli and Jabrail districts from the occupation. The Azerbaijani flag waves in these territories, people return there. A new settlement has been built in these lands. Our military victory shows the power and might of the Azerbaijani people. This shows that the Azerbaijani people will never reconcile with this occupation and will liberate their lands. To achieve this, we must be even stronger,” the head of state added.

International organizations support Azerbaijan’s fair position on the settlement of the Armenia-Azerbaijan Nagorno-Karabakhconflict, President of Azerbaijan said during his inauguration ceremony on April 18, AzVision.az reports.

“Sufficient as an example is the fact that over the past 15 years, some of the most prestigious organizations have approved our proposal on the conflict and reached key resolutions which say that the conflict must be solved within Azerbaijan’s territorial integrity,” the head of state said.

Noting that there is a legal framework for the settlement of the conflict, the head of state said Azerbaijan has exposed Armenia's aggressive policy over the last 15 years and as a result of Azerbaijan's efforts Armenia is isolated from many regional projects.

"The UN Security Council resolutions are the main legal framework for the settlement of the conflict. We have been able to prove to the world that we are right. Although Armenian lobby organizations have campaigned against Azerbaijan, they have not been able to influence international decisions. We have gained political and diplomatic successes,” President Aliyev said.

The head of state stressed that no country recognizes the so-called regime created in Nagorno-Karabakh.

“International organizations and neighbor countries condemned the referendum held there. We would like the world community to know that not only Karabakh, but also present-day Armenia is historical Azerbaijani land. There is enough evidence for this. We have been subject to deportation on several occasions and that is what we must convey to the world,” he added.

The president said that the Azerbaijani state will continue to pursue its current policy and will achieve its target.

“This conflict should only be resolved within the territorial integrity of our country. There is no other way. We will never allow a second Armenian state to be established. Our principled position with regard to the resolution of this conflict is supported by the Azerbaijani people. Our strength will grow further in the years to come,” he noted.

Ilham Aliyev went on to say that in many cases the norms of international law do not work, meaning whoever is stronger is considered to be just.

"We are well aware of the fact that the factor of strength has gained significance. This is a reality that we must reckon with, which once again shows that our army building policy is the only right policy,” the head of state said.