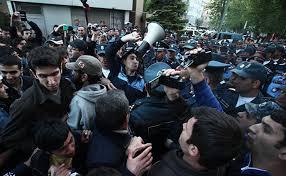 The Armenian Defense Ministry has today issued a statement demanding participants of the rallies against Serzh Sargsyan's appointment as the Prime Minister not to block the streets adjacent to the ministry's building in Yerevan, RIA Novosti reported.

"We urge organizers of the mass events to refrain from blocking the streets adjacent to the Defense Ministry , as well as not to create obstacles to cars with state license plates of the Ministry," the statement reads.