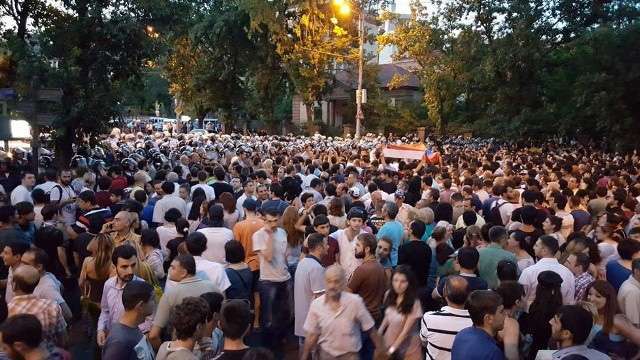 Participants of the action holding against the election of former President Serzh Sargsyan as Prime Minister of Armenia resumed marches in the streets of Yerevan on April 23 morning, RIA Novosti reported.

Marches are held by several groups of protesters, one of the actions has launched at Yerevan State University.

The actions against the election of Sargsyan leading the nation since 2008 as Armenia's Prime Minister began on April 13. Within the framework of the new Parliamentary Republic (since April 9), the Prime Minister actually leads the nation. The opposition accuses Sargsyan of poor governance and deteriorating economic situation, and on April 17, it announced the beginning of "velvet revolution". Despite the protests, the Armenian Parliament elected Sargsyan to the post of Prime Minister on April 17.

On April 22, another opposition march was stopped in Erebuni district of Yerevan with the help of police. Before that, talks were held between the opposition leader Pashinyan and Sargsyan, which lasted for three minutes and ended without result.