Opposition prepares for siege of Republican Party of Armenia 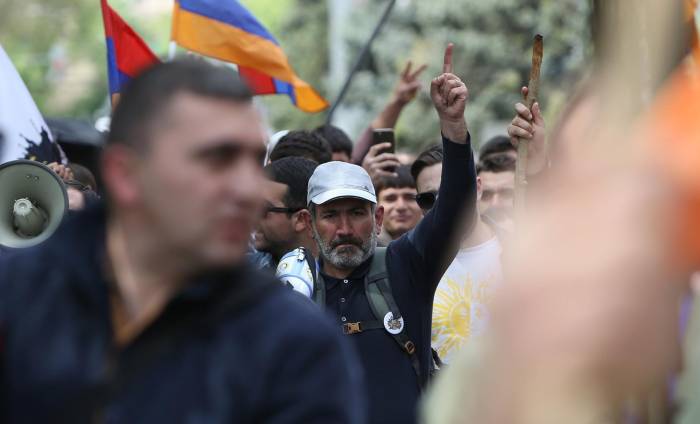 Armenian police surrounded the headquarters of the RPA on Melik Adamyan street. The police managed to get out of the blockade near the Central Bank and to transport the armored vehicles and barbed wires to the RPA office.

Karapetyan admitted that opposition leader Pashinyan may secure victory in the polls.

"This is a deadlock situation. Pashinyan declares that the acting premier should be a candidate of the people, and he is the one. I asked the country’s president to seek advice of political forces and set new parliamentary polls. If Armenia’s citizens want to elect Pashinyan, he will become the prime minister," Karapetyan said.

Earlier, the opposition leader said would not back early elections unless a candidate of the people became the prime minister. Pashinyan called on supporters to stage a rally today after planned talks with the ruling Republican Party were canceled.

"The Republican Party is thinking about taking advantage of Serzh Sarksyan’s resignation and wants to keep power,"Pashinyan said in a video appeal posted on his Facebook page after he led thousands of people on a march.

"We can’t agree on the appointment of this party’s representative as prime minister and we can’t allow this corrupted system to continue to exist,” he said, urging supporters "to come to the square and finish the velvet revolution."

On Wednesday, Pashinyan and Karapetyan are expected to launch talks. However, on Tuesday evening Pashinyan refused to hold dialogue and called to continue protests.

On Monday, Serzh Sargsyan, formerly the president who was elected as the prime minister by the parliament on April 17, resigned amid mass protests that started across the country on April 13. The protests are led by opposition leader from the Elk bloc Nikol Pashinyan. First Deputy Prime Minister Karen Karapetyan was appointed Acting Prime Minister.