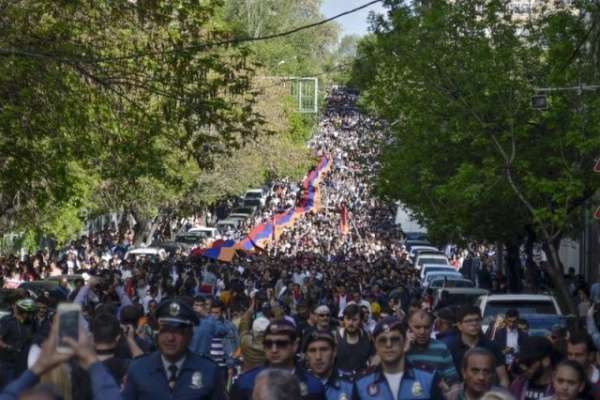 The ARF Dashnaktsutyun Party has announced it leaves the political coalition with the Republican Party of Armenia. Dashnaktsutyun says that a new political situation has shaped in the country, so the party believes that the current crisis needs to be resolved in the framework of the constitution and legislation only, Eurasia daily reported.

“Taking into account the current situation, we declare that we terminate our participation in the political coalition,” a statement of the party says.

Dashnaktsutyun also believes that the parliament must elect as prime minister a person enjoying people’s confidence; the new premier is expected to ease the tension and overcome the political crisis.

Earlier, the Yelk Party nominated the leader of the protest movement Nikol Pashinyan to the prime minister’s post.

Yerevan has been ridden by mass protest actions since April 13. The protesters were against former president Serzh Sargsyan becoming prime minister. At a rally on April 17, the leader of the protest movement Nikol Pashinyan declared start of a “Velvet Revolution” in the republic. On the same day, the Armenian parliament voted for appointing Serzh Sargsyan to the prime minister’s post: 77 MPs voted for it, 17 MPs were against.

After a constitutional reform was approved by a referendum in 2015, Armenia switched from the presidential to parliamentary republic. Prime Minister Serzh Sargsyan was supposed to have all power levers concentrated in his hands. Armen Sargsyan elected as president on April 2 was to have only representative functions.