President Aliyev: All Azerbaijani cities liberated from occupation to be restored 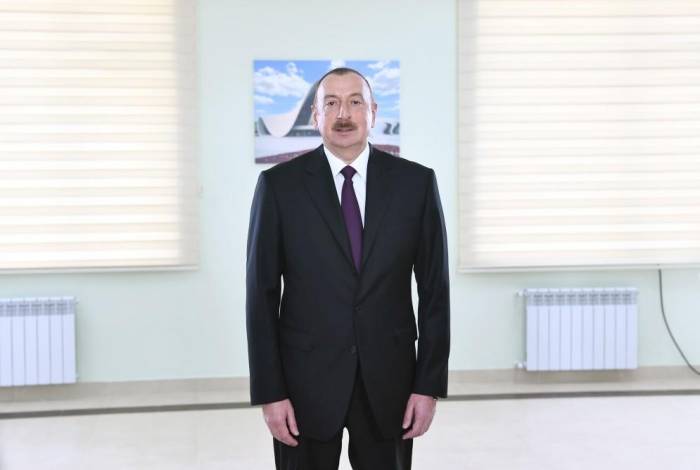 He was speaking May 24 at the meeting with the internally displaced persons, during the opening of the Gobu Park residential complex for the IDPs in the Garadagh district of Baku.

The head of state stressed that the vicious nature of Armenian fascism has been manifested in the consequences of this conflict.

“However, the Azerbaijani people are confident of restoring the country’s territorial integrity. Both international law and justice are with us. The truth of history is with us. Today, the force factor plays a major role in the world is on the rise; powerful countries succeed. Azerbaijan is also a powerful country. We have a strong army, a strong economy and a well-thought policy,” President Aliyev said.

He emphasized that the restoration of the Jojug Marjanli village is an indicator of the unshakable spirit of the Azerbaijani people.

“This once again proves that the Azerbaijani people will never accept this occupation. Besides, all IDPs live with the desire to return to their native lands. I’m confident that we will accomplish this goal,” he said.

The head of state noted that the restoration of the Jojug Marjanli village became possible after the glorious victory of the Azerbaijani Army in the April battles.

“The restoration of this village was possible after parts of Aghdere, Fuzuli, Jabrayil districts were cleared of the occupants. The Azerbaijani Army once again demonstrated its power. The Azerbaijani people once again showed that they will never accept the occupation and will at all costs return to their native lands and restore the country’s territorial integrity. Citizens from Jojug Marjanli, people who have for many years lived in different places prefer to return to their village. Now life is reviving there, conditions are being created. Necessary infrastructure has been created in the village for living and working,” he said.

All this once again shows that all destroyed cities of Azerbaijan will be restored after being liberated.

“All historical monuments, mosques, museums in our occupied territories were destroyed and looted by Armenians. All our cities were destroyed. This is an unprecedented barbarism. All images of these destroyed buildings, houses, mosques demonstrate the predatory essence of Armenian barbarism. However, we will return to our native lands. No one doubts this as we have returned to the Jojug Marjanli village, Shikharkh settlement, President Aliyev stressed.