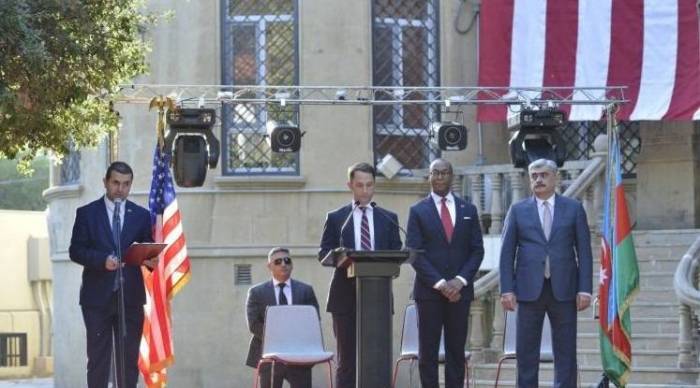 The US embassy in Azerbaijan has organized an official reception on the occasion of the 242nd anniversary of the nation’s declaration of independence.

US Chargé d'Affaires in Azerbaijan William Gill spoke about the country's independence, noting that today the United States is determined to move forward in the way it started following in 1776.

He also touched upon the centenary of the Azerbaijan Democratic Republic.

"Both the United States and Azerbaijan know that commemoration of historical values allows us to identify the way we want to continue as a society. The United States continues to support independent, stable, prospering Azerbaijan, and I am convinced that by working together we can and will build a good future,” he said.

Speaking at the event, Minister of Finance Samir Sharifov congratulated the US people on Independence Day on behalf of the Azerbaijani government, noting that bilateral relations are developing within the interests of the two countries.

"Azerbaijan supports the United States’ anti-terrorist activities. The United States has always supported energy projects involving Azerbaijan. The Azerbaijani side appreciates President Donald Tramp’s attitude towards our country and US support for the realization of major energy projects in Azerbaijan. We are convinced that cooperation with the United States will continue to grow in the future. As President Ilham Aliyev said, we have high hopes for the efforts of the US as an OSCE co-chair in finding a fair resolution of the Nagorno-Karabakh conflict,” he said.