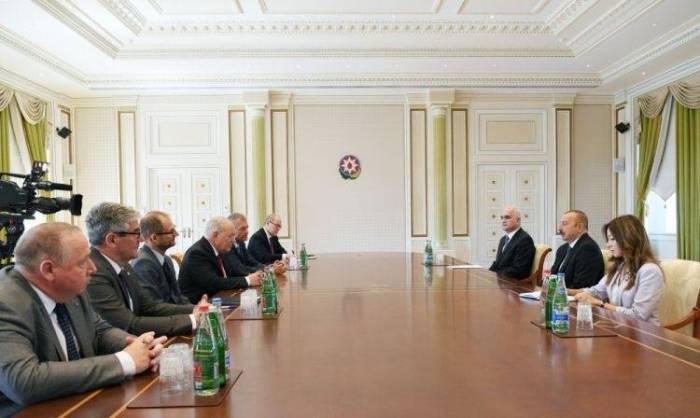 President of the Republic of Azerbaijan Ilham Aliyev has received a delegation led by head of the Federal Department of Economic Affairs, Education and Research of the Swiss Confederation, Federal Councillor Johann N. Schneider-Ammann.

Johann N. Schneider-Ammann said he is pleased to be visiting Azerbaijan, noting that the purpose of their visit is to get acquainted with the ongoing development processes in Azerbaijan and identify issues related to further expansion of business relations between the two countries. He also expressed the delegation's interest in getting more detailed information about Azerbaijan's participation in the “One belt, One Road" project. Johann N. Schneider-Ammann pointed out the successful cooperation between Switzerland and Azerbaijan within the World Bank and International Monetary Fund.

Swiss Federal Councillor Johann N. Schneider-Ammann extended his congratulations to the head of state on the commissioning of TANAP project. He thanked President Ilham Aliyev for annually participating in the Davos Economic Forum.

Nothing that relations between the two countries are developing successfully in political and economic areas, the head of state said there is a great potential for further expansion of cooperation. President Ilham Aliyev emphasized that there are good opportunities for expanding business relations in various fields, pointing to the country’s rich experience in implementation of infrastructure projects and mutual investments in this regard. Recalling his meeting with Johann N. Schneider-Ammann in Davos, the head of state said that the visit of the delegation led by him to Azerbaijan will contribute to the deepening of relations and that cooperation between the two countries will be further expanded. President Ilham Aliyev expressed his confidence that Azerbaijan’s economy will continue to grow in the coming years, adding that the country plans to implement a large number of industrial and infrastructure projects and Azerbaijan is keen in Swiss companies' involvement in these issues.

During the conversation, the sides emphasized that the Baku-hosted Swiss-Azerbaijan Business Forum and the participation of a large number of business representatives from both Switzerland and Azerbaijan in this event will contribute to the expansion of economic cooperation between the two countries.

The sides exchanged views over the prospects of cooperation in trade, investment, transport, healthcare, education and other areas.