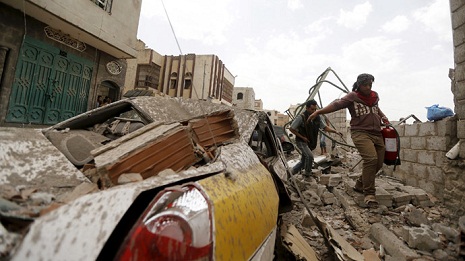 The wealthiest Arab nation – the House of Saud petro-hacienda – supported by other GCC petro-rackets and also the wealthy “West”, has launched an – illegal – bombing/war/kinetic operation against the poorest Arab nation in the name of “democracy.”

And this absurdity is just the beginning.

The EU’s foreign policy chief, the innocuous as a stale cannoli Federica Mogherini, seems to be mildly alarmed. She remarked that Saudi bombing of hospitals and “deliberate targeting and destruction of private homes, education facilities and basic infrastructure cannot be tolerated.”

Well, the EU tolerates exactly the same thing in Donbass perpetrated by Kiev’s goons – so nothing will come out La Mogherini’s feigned outrage.

The Red Cross and the Russian Federation, for their part, at least are demanding a temporary ceasefire to allow for humanitarian relief. Humanitarian relief is incompatible with the House of Saud’s bloodline. So after two weeks of Saudi ‘Shock and Awe’, the current toll of at least 560 Yemeni civilians dead (and counting), and 1700 wounded - dozens of them children – is bound to increase.

Bomb Iran? Not now; the new normal is bomb Yemen. But still bomb Iran might be back in a flash. Pentagon supremo Ash Carter confirmed last week “all options are on the table” even if an Iran-P5+1 nuclear deal is finally reached in June. So, for the record, the Pentagon is affirming nuclear negotiations are just white noise unable to deter the tantalizing prospect of yet another nice little Middle East war.

Needless to add, the so civilized ‘West’ didn’t even flinch when “our bastards” the House of Saud invaded and started shockin’ an’awin’ dirt-poor Yemen. No UN Security Council resolution. Not even a mandate from the totally discredited Arab League. Who cares? After all the ‘Empire of Chaos’ has done the same over and over again with total impunity.

Much hysteria has been raging on whether the Houthis are about to take control of the Bab-el-Mandeb – one of the key strategic global energy chokepoints along with the Straits of Hormuz, and as crucial as the Suez Canal. Nonsense. Whatever the House of Saud does, the not so hidden ‘Empire of Chaos’ agenda is never to lose control of the Bab-el-Mandeb, the Gulf of Aden, and the Socotra Islands.

This is part of what we could dub ‘Chokepointistan’; wars taking place near or around energy bottlenecks, and always narrated in Global War on Terror (GWOT) deceitful terminology. US Think Tankland is more straightforward, carefully following US naval deployments. That’s what this is all about; an Orwellian “freedom of navigation” masquerading a hardcore strategy of shutting out the geopolitical enemy – be it Iran, Russia, China or all of the above.

‘Chokepointistan’ is all over the place: just watch the war or pre-positioning action in the Bab-el-Mandeb (with spillover effects from Yemen to Somalia, Eritrea, Ethiopia, Djibouti); the Straits of Hormuz (all about Iran); but also the strait of Malacca (all about China), Panama (about Venezuela), the coming Nicaragua canal (about China), the Korean Strait, the Taiwan Strait, the Kuril Islands, and last but not least the Baltic Sea.

Saudi intel knows the Houthis can’t possibly control the Bab-el-Mandeb – not to mention Washington would never allow it. What freaks the Saudis out is that the Houthi rebellion in Yemen – supported by Tehran – may encourage bright rebellion ideas among the Shi’ite majority in the eastern provinces in Saudi Arabia, where most of the oil is.

And this where the Saudi excuse for war interfaces with the empire’s paranoia of preventing Iran, Russia and/or China from establishing a possible strategic presence in Yemen, at the Bab-el-Mandeb, overlooking the Gulf of Aden.

So we have once again Pentagon supremo Carter insisting, “The United States supports Arab plans to create a unified military force to counter growing security threats in the Middle East, and the Pentagon will cooperate with it where US and Arab interests coincide.” Translation: we gave the green light for our bastards to maintain “stability” in the Middle East.

Yet there’s a spanner in the works; the possible Washington-Tehran rapprochement, assuming a nuclear deal is reached. For the self-described “Don’t Do Stupid Stuff” Obama administration, the nuclear deal will be their only foreign policy success. Moreover, without Tehran there’s no meaningful fight against ISIS/ISIL/Daesh in “Syraq”.

None of this mollifies the cosmically paranoid Saudis, who assembled in a flash a Grand Armada Run Amok (GARA) – 100 jet fighters, 150,000 soldiers – respectfully described by US Think Tankland as a “coalition” of 10 countries. Without even blinking at UN norms, the Saudis instantly declared the whole of Yemen as a no-fly zone.

And along with routine bombing of residential complexes, the al-Mazraq camp for the internally displaced in Hajjah, a dairy factory near Hodeida, and other instances, came, what else, hardcore internal Saudi repression, via a crackdown with tanks and indiscriminate shooting in Awamiyah, in the eastern provinces; Shi’ites there can’t even think of organizing protests against the bloodbath in Yemen.

In a nutshell, this is the immensely wealthy, corrupt, medieval Saudi regime busy at war against their own people. The usual hard-line Wahhabi imams are busy working up anti-Shi’ite and anti-Iranian fever everywhere; these are all “apostates” under the takfir doctrine, and Iranians are lowly “Safawis” - a quite pejorative reference to the 16th century Safavid dynasty. It’s crucial to remember that Islamic State treats Shi’tes and Iranians the exact same way. But forget about any of this being reported by Western corporate media.

The General and the Sheikh

The House of Saud insists it wants to reinstall the government-in-exile of Yemeni President Abd Rabbuh Mansour Hadi. Or, as Saudi Ambassador to the US, Adel al-Jubeir glowingly put it, “protect the legitimate government of the country.”

Royally paid Saudi lobby hagiographers are once again frantically spinning the Sunni versus Shi’ite sectarian narrative – which totally ignores the mind-boggling tribal/class complexity of Yemeni society. In a nutshell, this laughable Saudi defense of democracy is paving the way for a ground war; a long, bloody and horribly expensive ground war.

And it gets, as expected, even more absurd. Gen. Martin Dempsey, Chairman of the Joint Chiefs of Staff, was recently asked during a Senate Armed Services Committee hearing whether he knew of “any major Arab ally that embraces ISIL.” His response: “I know major Arab allies who fund them.”

Translation: the US government not only does not sanction or punish these “allies” (the real fun is to sanction Russia) but showers with logistical and “non-lethal” support the “coalition” that is arguably fighting the same Islamic State they are funding. No one is making this up; this is how the endless war on terra remains the gift that keeps on giving.

It gets even curioser and curioser when we have Dempsey on the same page of Hezbollah’s Sheikh Nasrallah. In this crucial speech, Sheikh Nasrallah offers the most extensive and precise account of the origins and ideology of ISIS/ISIL/Daesh. And here he expands on Yemen, Saudi Arabia and Iran.

So what we have is the ‘Empire of Chaos’ ‘leading from behind’ in the war on Yemen and also de facto ‘leading from behind’ in the fight against ISIS/ISIL/Daesh; the ones doing the heavy lifting are Iraqi militias supported by Tehran. The hidden agenda is always – what else –chaos; be it across “Syraq” or inside Yemen. With an extra bonus; while Washington is engaged on striking a nuclear deal with Tehran, it also turbo-charges an alliance against Tehran using the House of Saud.

Vietnam in the desert

The House of Saud badly wants Pakistan to take no prisoners, supplying bomber jets, ships and lots of ground troops for their war. Riyadh treats Islamabad as a vassal state. A joint session of the Pakistani Parliament will decide what to do.

It’s quite revealing to learn what happened when Pakistan`s most popular private TV channel assembled representatives of all major political parties to explain where they stand. Soon they reached a consensus; Pakistan should be neutral; act as mediator; and commit no troops, unless there was a “tangible threat” to the two holy mosques in Mecca and Medina, which is far from the case.

The House of Saud remains on overdrive, showering tons of cash over Salafi and Deobandi preachers to bullhorn their war; that includes a delegation of ulema visiting Riyadh. Support has already duly poured from Pakistan-based hardcore groups that trained with al-Qaeda and fought with the Taliban in Afghanistan; after all they are all funded by Wahhabi fanatics.

Meanwhile, in the front lines, a real game-changer may be ahead, with the Houthis already firing missiles across the border at Saudi oil installations. Then all bets are off – and the possibility that long-range missiles have been pre-positioned becomes quite credible.

That scenario would mean a foreign intel agency luring the House of Saud into its own Vietnam quagmire in Yemen, setting them up for a barrage of missiles hitting their pumping stations and oil fields, with catastrophic consequences for the global economy. It’s crucial to remember that the Grand Armada Run Amok (GARA) assembled by Riyadh happens to account for no less than 32% of global oil production. This cannot possibly end well.

Everyone in Yemen has an AK-47, not to mention RPGs and hand grenades. The terrain is guerrilla heaven. History spells out at least 2,000 years of hardened tribes fighting foreign invaders. Most Yemenis hate the House of Saud with a vengeance; a majority follows what the Houthis announced in late February, that the House of Saud and the US were planning to devastate Yemen.

The Houthi rebellion includes both Sunnis and Shi’ites – thus totally debunking the Saudi narrative. When they captured the Yemeni National Security Bureau, which was basically a CIA station, the Houthis found a wealth of secret documents that “compromised” Washington’s Yemeni chapter of the war on terra. As for the Saudi Army, it’s a joke. Besides, it employs a huge contingent of – you guessed it – Yemeni soldiers.

“Operation Decisive Storm” – yet another Pentagon-style illegal war – has already plunged Yemen into the twin plagues of civil war and humanitarian disaster. The remains of al-Qaeda in the Arabian Peninsula (AQAP), and most of all ISIS/ISIL/Daesh (who hate the Houthis and all Shi’ites with a vengeance) couldn’t be happier. The ‘Empire of Chaos’ couldn’t give a damn; the more widespread the chaos, the better for the Pentagon-defined Long War (on terra).

Over five years ago I wrote that Yemen is the new Waziristan. Now it’s also heading towards the new Somalia. And soon it may become the House of Saud’s Vietnam.