George Friedman: The criticality of Azerbaijan for the United States 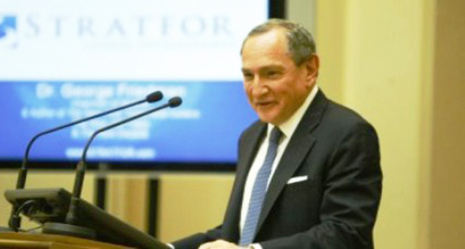 American analyst George Friedman has written an article which deals with the course of geopolitical processes in the South Caucasus. The article features an individual approach to the points which are critical on a Eurasian scale. It places a special emphasis on Azerbaijan with Friedman forecasting that geopolitical struggle for global domination among superpowers will toughen.

Security and democracy: history repeats itself

It`s a fact that geopolitical interests in the South Caucasus have reached a new level. Increasingly, intelligence centers are carrying out analyses on the importance of the regional countries. And what lies behind this tendency is clear. There is a need to think over the reasons why developments in the Middle East are having a wider geopolitical impact. In this context the Caucasus is considered a crucial element in an important spectrum of interests.

George Friedman, Founder and Chairman of Stratfor, a geopolitical intelligence firm, has carried out engrossing researches into geopolitical importance of problems in the South Caucasus. But what interests us for now is his Azerbaijan-related analysis published by Forbes (see: George Friedman. Why Azerbaijan Should Matter To America // "Forbes", 11 June, 2013) because what dominates the Western geopolitical thought with respect to the South Caucasus countries is topical.

In the United States, there is not an unambiguous political attitude towards the region. There are differences in the approach of realists and idealists to geopolitical processes taking place in the South Caucasus. For realists, security of regional states must be ensured to the maximum extent, while idealists put an emphasis on promotion of American values and protection of democracy. Contradictions between these points of view show in the foreign policy of the USA to a certain degree. And this is featured in George Friedman`s article entitled ``Why Azerbaijan Should Matter To America``.

In his article, Friedman puts up a thesis that the United States won`t take responsibility for security of regional states. The USA must not act as guarantor of security of any country, and it will never do. Instead, Washington must seriously support the countries, which it considers strategically important. Friedman emphasizes the criticality of Azerbaijan in this context.

He calls Azerbaijan a key state of the region. ``...I thought of Hitler urgently trying to reach Baku and its oil, and the fact that his disaster at Stalingrad was actually part of his attempt to seize Azerbaijan`s oil fields,`` he says.

Friedman writes that history repeats itself in a certain sense. Superpowers are seeking to include Azerbaijan in their sphere of influence to strengthen their positions in Eurasia. This thesis is of great importance to us. The point is that complex geopolitical games are played with respect to the region. Armenian analysts are trying to create an impression that Armenia plays a decisive role in the region. Serzh Sargsyan, in his address to recent UN Security Council session, even made forecasts that geopolitical situation in the region would change, and claimed that this process had already taken a turn for Armenia`s advantage. But George Friedman`s point of view is the complete opposite – for him Azerbaijan is a critical country not only for the region, but also for Eurasia.

A look into the issue from another perspective reveals a thought-provoking picture. Azerbaijan`s geopolitical criticality means there is intense struggle among Russia, Iran, Turkey, China and the USA. It`s a fact that in some cases Azerbaijan faces ungrounded claims, and this has much to do with the impact of the struggle among superpowers. Certain circles are trying to exert pressure on Baku in order to achieve their goals. And this tendency has been growing recently.

The severity of the geopolitical struggle

The thesis that superpowers regard Azerbaijan as one of the important countries in Eurasia must be seriously considered. Friedman does not limit Azerbaijan`s criticality just to energy factor. For him, geographic, cultural, political, geopolitical, military and economic factors must be taken into account. This proves that in comparison with Armenia and Georgia Azerbaijan enjoys greater geopolitical importance. But the fact that a government that appears to have close ties to Russia has replaced the formerly pro-American government of Georgia opens up new geopolitical circumstances for Azerbaijan. In Friedman`s opinion, Moscow can use the Georgian factor to limit energy routes aimed at the West. This can bring about serious consequences to the region from the strategic point of view. What attitude should Washington take under these circumstances?

Friedman`s article focuses on this. The Stratfor chairman says the United States must increase efforts towards pursuing its interests in the region. According to him, the end of the ``Cold`` War meant greater opportunities for the USA to be the global dominant power. Nearly 100,000 Americans died in the ``Cold`` War. And there is no need to give so many victims today. This requires giving a new content to foreign policy. Interestingly, Friedman believes that many countries wish the United States take responsibility for their security. But the United States can afford to support only countries that take primary responsibility for their national security on themselves. The United States cannot be the primary source of that security.

This leads to an interesting conclusion. The United States would continue to be the global dominant power, but without wasting economic and military efforts in different regions of the world like it had done previously. Washington accepts the existence of the regional balance of power. However, the United States gives its opponents a message that there are limits to their power.

The aforementioned points need serious consideration if we look at the case of Azerbaijan through the prism of global geopolitical games. Geopolitical struggle for the country can become more severe in the light of the fact that Russia is now trying to increase its military presence in Armenia. On the other hand, the Georgian government has recently made statements which can add uncertainty to the regional situation. Official Tbilisi appears to be making some maneuvers to find a way out. But it`s unclear why Georgia wants to achieve its goals at the cost of Azerbaijan`s interests among other factors.

As far as official Yerevan is concerned it has serious hesitation in making a geopolitical choice. Helpless against pressure from different directions, the Armenian leadership continues to have a destructive attitude. Under these circumstances some forces are trying to destabilize the situation in Azerbaijan, which means there are biased plans against the country. Instead of finding a fair solution to the problem, they are arming some regional countries which can deteriorate the situation. But the things would have been promising, if those powers were seeking socio-economic and cultural development of the region. Ensuring fair settlement of regional conflicts would contribute to strengthening peace in entire Eurasia. Unfortunately, even experts like Friedman put an emphasis on exaggerating the issue of who the United States should sell arms to.