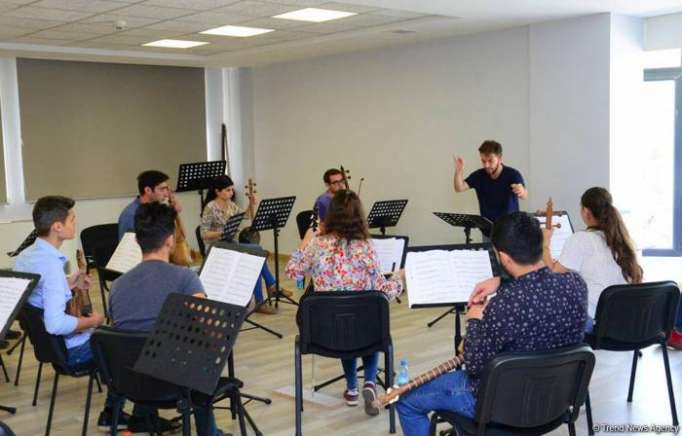 Azerbaijan will hold the Nasimi Festival of Poetry, Arts, and Spirituality for the first time on September 27-30.

The festival, dedicated to the work of Imadaddin Nasimi (1369-1417), one of the brilliant poets and thinkers of the East, is aimed at glorifying and perpetuating his poetry and art.

The festival is organized by the Heydar Aliyev Foundation and supported by Azerbaijan’s Ministry of Culture.

Poetry of the great Imadaddin Nasimi, who lived six centuries ago, is peculiar not only in its brilliant skillfulness, but also in its deep sense and convincing sincerity, calling everyone to plunge into thoughts about the mystery of being and to look into the deepest layers of the soul.

Spectators will hear Nasimi’s poetry, excerpts of mughams, new works of composers, based on the compositions of the outstanding Azerbaijani musician of the 13th-14th centuries Abdulgadir Maraghai for the ensemble of old musical instruments "Echo of Centuries" under the Azerbaijan National Conservatory, during the official opening ceremony of the event in the Heydar Aliyev Center on September 28.

During the event, spectators will also hear "Legend about Nasimi" by brilliant composer Fikret Amirov, the song "Prayer" written by Honored Artist of Azerbaijan Tunzala Aghayeva by using Nasimi’s words.

A Trend journalist visited the Azerbaijan National Conservatory during rehearsals of the ensemble of old musical instruments "Echo of Centuries".

The "Echo of Centuries" ensemble consists of talented students of the Conservatory, created by People's Artist of Azerbaijan, Professor Fakhraddin Dadashov.

“I am happy that I have created such an ensemble with participation of the talented youth,” Dadashov said. “There is the spirit of our ancestors, their love of poetry, music, philosophy, aspiration for spirituality and perfection in our ensemble.”

“Each performer in the ensemble is fully aware of that and is preparing for the festival in honor of great Nasimi,” he added. “This music by Abdulgadir Maraghai is full of sincerity and its performance at the festival’s opening ceremony will be a significant event in our lives.”

Four works created by such composers as Aliya Mammadova, Rufat Khalilov, Ayaz Ganbarli and Farid Fatullayev based on Abdulgadir Maraghai’s music will be performed by the "Echo of the Centuries" ensemble.

A member of the Azerbaijan Union of Composers Farid Fatullayev stressed that thanks to the Heydar Aliyev Foundation’s project, young composers have a brilliant opportunity to prove themselves, and the project gives a great incentive in further creative activity.

“Based on Maraghai’s music, we created our own compositions,” he added. “I created a rhythmic composition and called it Jangi. The word ‘jangi’ means ‘battle’ in the Azerbaijani language. Jangi was performed earlier in honor of heroes. The music expresses a call to battle, to heroism.”

“This is my first experience with old musical instruments and I should stress that despite all the complexity of the work, I really enjoy it,” Hashimov said. “The project is amazing! For me it is something unimaginable – the philosophy of spirituality and high art! For us, young musicians, it is an honor to perform these works at the opening ceremony of the Nasimi Festival in the Heydar Aliyev Center. In the future, together with this ensemble, I would like to stage works by European classical music composers.”

“Kamancha was originally with one string, but now it has from 4 to 8 strings; the 5-string tar now has 13 strings,” Mammadov said. “We have conducted research and ancient musical instruments have been modernized in accordance with the requirements of the time for sound quality.”

“In particular, when great composer Uzeyir Hajibayov created the ensemble of folk instruments, the sound range was two and a half octaves, and our task was to raise it to seven octaves, which was done using national ancient instruments,” he said.

“This is actually a revolution in the national music! Spectators of the Nasimi Festival will see and hear unique works with a new sound at the grandiose festival of poetry, art and spirituality,” Mammadov added.

For the first time, registration for such a grandiose festival will be held through the official website www.nasimifestival.live rather than via ticket sales and invitations.

The festival will be held under the slogans “Beyond the Limited Self”, reflecting the philosophical views of the poet, and “I am a Particle, I am the Sun” which are the poet’s lines.

The program of the large-scale event covers various types of art and knowledge fields. During the festival, programs will be organized in various places in Baku, as well as in Shamakhi, the native city of the poet.