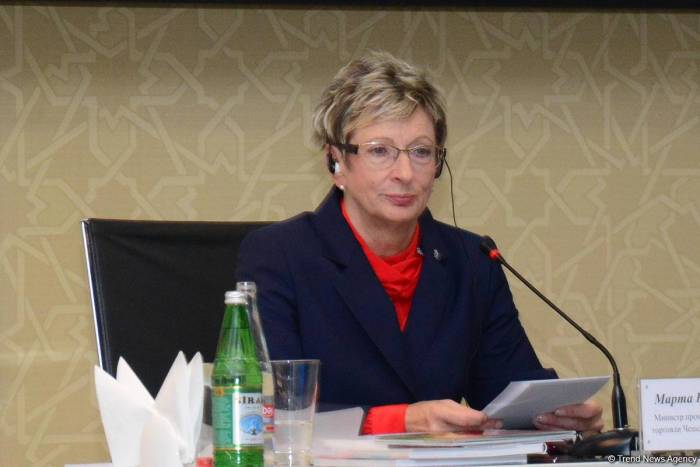 The Azerbaijan Railways CJSC has held a meeting with a delegation led by the Minister of Industry and Trade of the Czech Republic Marta Novakova, the Public Relations Department of the company said in a statement Sept. 12.

The Chairman of Azerbaijan Railways CJSC Javid Gurbanov informed the members of the Czech delegation about the transport and logistics potential of Azerbaijan, the Baku-Tbilisi-Kars railway, as well as the Trans-Caspian International Transport Route, North-South and South-West transport corridors.

He noted the high level of relations between the railway agencies of the two countries.

Thus, on April 14, 2015, in order to implement the second phase of the "Reconstruction of Azerbaijani Railways" project, an agreement was signed between Azerbaijan Railways CJSC and the Czech MORAVIA STEEL Group A.S. company as an addendum to the export contract "On material and technical supply and overhaul of the 600-kilometer Baku-Boyuk-Kesik section of railways of the Republic of Azerbaijan".

The implementation of the new project began at the end of October 2015. The repair work in this direction is already coming to an end.

In turn, the Czech minister highly appreciated the work carried out by the Azerbaijani side in the implementation of international and regional projects. The interest in expanding bilateral ties was expressed.

The further expansion of bilateral cooperation was discussed during the meeting.

The meeting was also attended by the Ambassador of Czech Republic in Azerbaijan Milan Ekert.

She said pharmaceutics and petrochemical industry are of the greatest interest for Czech entrepreneurs. In addition, the minister noted the possibility of creating a joint venture for production of rail cars.

The Czech Republic has good experience in the production of trains, the minister said. Novakova in turn noted that Azerbaijani market is attractive for Czech companies.

Azerbaijan is traditional partner of the Czech Republic, she noted, adding that the two countries have no problems regarding political or economic issues.

Czech Republic is ready to share experience with Azerbaijani partners and offer technologies in the sphere of domestic waste processing, construction, transport, energy and pharmaceuticals, she said.

There are opportunities to create joint ventures in the petrochemical field, Novakova said.

She added that in 2019, Prague will host the next meeting of the Azerbaijani-Czech intergovernmental commission for economic cooperation.

She said that presently the Czech Republic imports one third of the oil it consumes from Azerbaijan.

The bulk of oil in the Czech Republic is processed at the Kralupy refinery, she noted.

Unfortunately, the Czech Republic cannot influence this issue, since the refinery is presently managed by a Polish company, however, negotiations regarding this issue are underway, Novakova said.

At the same time, business relations between Azerbaijan and the Czech Republic are beginning to revive in the non-oil sector as well. Czech Iveco buses and L-39 planes are supplied to Azerbaijan.