China opens embassy in Dominican Republic after break with Taiwan 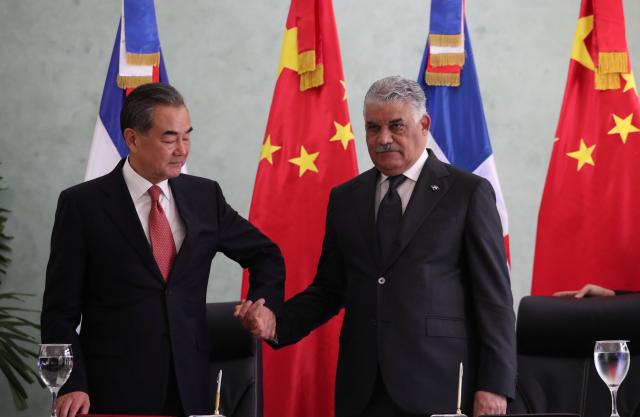 China’s most senior envoy inaugurated a new embassy in the Dominican Republic on Friday after the Caribbean country cut ties with Taiwan in a move that prompted U.S. concern over the Asian island’s dwindling number of allies.

Self-ruled Taiwan, which China claims as its own, now has formal relations with only 17 countries, almost all of them small and less developed nations in Central America and the Pacific, including Belize and Nauru.

Along with the Dominican Republic’s decision in May, Panama and El Salvador have also switched recognition to Beijing in the past two years.

The United States recalled its top diplomats in those countries and warned that China was offering economic incentives in a bid for domination.

Tensions between the United States and countries in the region have flared over U.S. President Donald Trump’s hard line policies against immigration.

U.S. Ambassador Robin Bernstein said on Thursday, in her first public appearance back in the Dominican Republic, that she had been asked about China’s role in the region while in Washington, and that she hoped countries were considering their “long-term goals”.

In a statement on Thursday, the U.S. embassy in El Salvador lamented that countries in the region were deepening ties to “unfamiliar partners” and engaging in transactions that “lack transparency”.

Taiwan says China offered the Dominican Republic a $3.1 billion package of investments and loans to get them to sever ties, though China said there were no economic pre-conditions.

Wang said the Dominican Republic is China’s biggest trade partner in the Caribbean, setting the foundation for diplomatic ties.

“The Chinese developing economy and expanding market have brought real benefits to the Dominican Republic,” he said.

Wang, in a swipe at U.S. criticism, said that as a sovereign country, the Dominican Republic had the absolute right to decide its own foreign policy and that no other nation had the right to interfere.

“The Dominican Republic establishing diplomatic relations with China does not target any third party, does not affect each other’s foreign policy, and will not harm the traditional influence and legitimate rights of other countries in the region,” he added.

Wang will also visit Guyana and Suriname before speaking at the U.N. General Assembly in New York.