Latvian FM: Nagorno-Karabakh conflict should be resolved by peaceful means 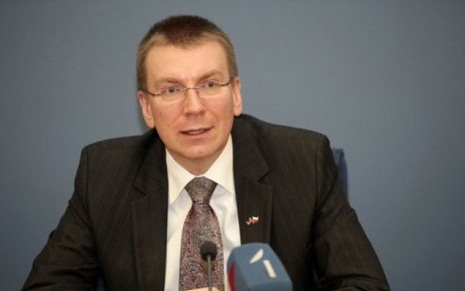 “We support resolution of the Nagorno-Karabakh conflict by peaceful means”, Foreign Minister of Latvia Edgars Rinkēvičs said at the press conference followinf his meeting Azerbaijani Foreign Minister Elmar Mamadyarov, who was in Latvia on an official visit, AzVision.az reports quoting the website of the Latvian Foreign Ministry.

According to him, the conflict should be resolved with peaceful means along with principles of international law, particularly the integrity and sovereignty.

During the meeting, Edgars Rinkēvičs acknowledged the advancement of bilateral relations between Latvia and Azerbaijan. Both Ministers concurred that Latvia and Azerbaijan have good potential for investment projects in sectors such as aviation, transport and logistics.

Referring to the Eastern Partnership Summit in Riga, Edgars Rinkēvičs emphasized that Latvia expects Azerbaijan to be represented at the highest level at this event.

Foreign Minister Mammadyarov said that Azerbaijan was interested in signing a strategic partnership agreement with the European Union. The Latvian and Azerbaijani Foreign Ministers welcomed the agreement reached between the E3+3 and Iran in the talks on Iran`s nuclear programme. Views were also exchanged on the developments in Ukraine.