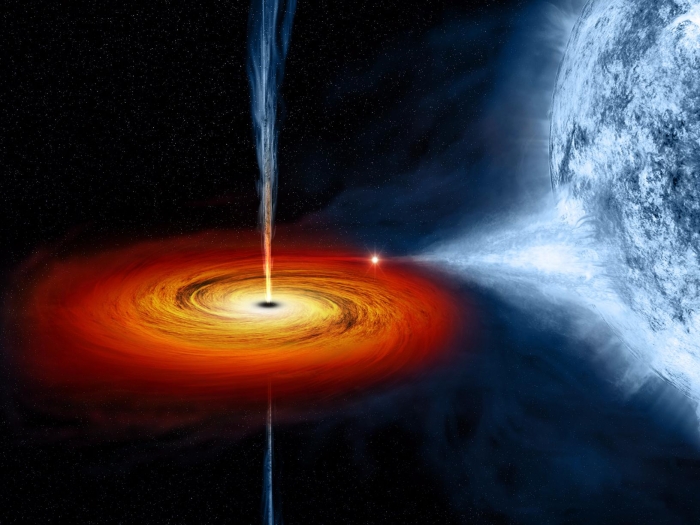 High energy light beaming from the edges of a “weird” star system within our galaxy has been detected for the first time.

The source of these signals is a microquasar – a black hole consuming material from its companion star before blasting it out in two jets across the Milky Way.

As electrons accelerate and collide at the end of these jets they produce powerful gamma rays, which scientists say can provide new insights into the universe’s most dramatic events.

The microquasar at the heart of the study, known as SS 433, is one of only a dozen ever found in our galaxy and is located around 15,000 light years away from Earth.

Despite this distance, the scientists said its relative proximity will give them an idea of events taking place well beyond the confines of our galaxy.

Professor Jordan Goodman, an astrophysicist at the University of Maryland who led the research, said because SS 433 is “right in our neighbourhood” it could provide insights into “its giant, extragalactic cousins, called quasars”.

Unlike the smaller microquasars, which only feed on single stars, quasars are massive black holes that suck in material from the centre of galaxies. As a rule, they are so far away that they prove difficult to observe directly from Earth.

The new measurements were taken using HAWC, a detector located high in the mountains of central Mexico.

These create a shower of particles that rain down onto the planet’s surface, which are detected by the HAWC apparatus.

Not only does the array of water tanks that forms the basis of HAWC absorb the particles, the special cameras inside them allow the researchers to determine the precise origin of the rays.

In their new paper, published in the journal Nature, the scientists have outlined the latest findings from SS 433, which has been gradually picked apart using data collected by HAWC.

“SS 433 is an unusual star system and each year something new has come out about it,” said Professor Segev BenZvi, a physicist at the University of Rochester who co-authored the study.

Gamma rays can be combined with other readings obtained from this microquasar and used to build up a complete picture of events on the other side of the galaxy.

“Looking at only one kind of light coming from SS 433 is like seeing only the tail of an animal,” said Dr Ke Fang of Stanford University.

“Thus, we combine all of its signals, from low energy radio to X-ray, with new high-energy gamma ray observations, to find out what kind of beast SS 433 really is.”

Professor BenZvi said the latest measurements provided new insights into “one of the weirdest objects in the Milky Way”.

“Every measurement gives us a different piece of the puzzle, and we hope to use our knowledge to learn about the quasar family as a whole.”