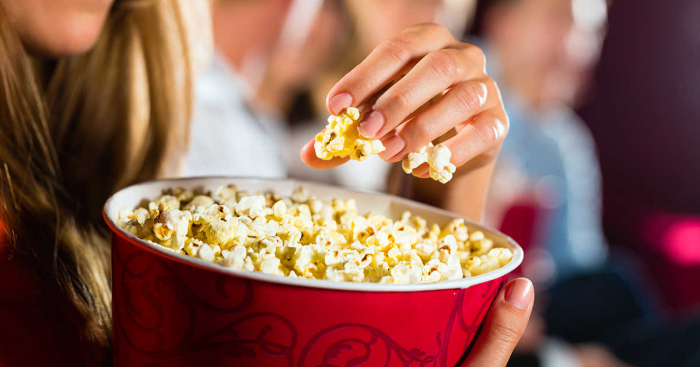 The savory smell. The crunchy bite. The salty kick. The buttery finish. Americans will recognize the smell and flavor of their favorite moviegoing snack anywhere. Why is it that we feast our taste buds on these crisp kernels while our eyes feast on the big screen?

A few converging aspects made popcorn the quintessential movie snack, according to Andrew F. Smith, author of Popped Culture: A Social History of Popcorn in America. Mostly, it boiled down to the snack’s price, convenience, and timing. Popcorn was cheap for sellers and for customers, and making it didn’t require a ton of equipment. Popcorn also became popular at a time when movie theaters were in desperate need of an economic boost, which is how popcorn got introduced to the silver screen.

Fun fact: popcorn does not refer to the popped kernel alone. It’s also the name for the specific type of corn that is used to make the snack. It was originally grown in Central America and became popular in the U.S. in the mid-1800s. Compared with other snacks at the time, it was supereasy to make, and it got easier in 1885 when the mobile steam-powered popcorn maker was invented. What hit the streets in the late 19th century was a fleet of independent popcorn purveyors. They were like the great-great-grandfathers of food trucks.

Since popcorn was cheap to make, it was also cheap to buy, which increased the popularity of this treat during the Great Depression. The Depression increased consumer spending on cheaper luxury items such as popcorn and movies, and the two industries teamed up. Theaters would allow a particular popcorn salesman to sell right outside the theater for a daily fee. By the mid-1940s, however, movie theaters had cut out the middleman and begun to have their own concession stands in the lobby. The introduction of the popcorn-driven concession stand to movie theaters kept the movie theater industry afloat, and popcorn has been a movie-watching staple ever since.