Azerbaijan has more than 70 diplomatic missions in the world 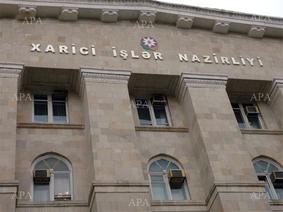 Today, employees of diplomatic services are celebrating Professional Holiday in Azerbaijan. This holiday was constituted under the order of Azerbaijani President Ilham Aliyev dated August 24, 2007.

The history of Azerbaijani diplomacy officially began on July 9, 1919. People`s Republic of Azerbaijan issued a temporary instruction on the Secretariat of the Ministry of Foreign Affairs on that day.

There were 16 foreign diplomatic missions in Baku in 1918-1920. Mammad Hasan Hajinski was the first Minister of Foreign Affairs and Alimardan bey Topchubashov (Ottoman-Turkey) the first Ambassador.

239 people worked in the diplomatic services of Azerbaijan People`s Republic. The Republic had diplomatic missions in these countries and cities till April 1920: Georgia, Armenia, Iran, Istanbul, Ukraine, Crimea, Kuban, Don and Irkutsk.

Currently, the Republic of Azerbaijan has diplomatic relations with 170 countries in the world.