Are there really right-brained and left-brained people? - iWONDER 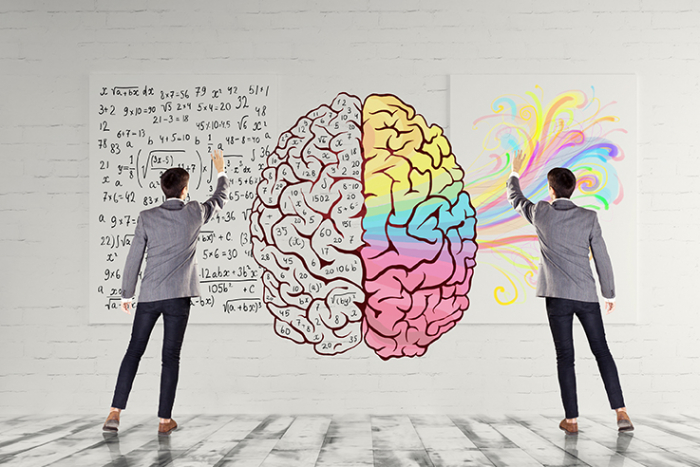 Are you a logical, precise thinker, or would you say that you’re more free-spirited and artistic? If you’re the former, somebody’s probably told you at some point that you’re a left-brained person, and if you’re the latter, right-brained.

The notion that the right half of the brain is the creative half and the left half is the analytical half and that our individual traits are determined by which half is dominant is widespread in popular psychology. There’s even a small industry devoted to this idea. There are self-help books, personality tests, therapies, and educational materials that claim to help you optimize the functions of the stronger half of your brain, get in touch with the weaker half, or even make the two halves stop their (supposedly) incessant battling inside your skull so you can finally get some peace and quiet.

The idea that there are right-brained and left-brained people is a myth. Although we all obviously have different personalities and talents, there’s no reason to believe these differences can be explained by the dominance of one half of the brain over the other half. Recent research using brain imaging technology hasn’t found any evidence of right or left dominance. One of the myth’s fatal flaws is that it relies on vague conceptions of the abilities it purports to explain. Math, for example, requires logical thought and, thus, is generally said to reside in the left brain, far away from all those artsy right-brain abilities. But mathematics is a profoundly creative endeavor in addition to being a logical one. So would a gifted mathematician be a right-brained person or a left-brained person? Likewise, artistic creativity isn’t just unbridled emotion. Many of the greatest works of art are products of rigorous, precise thought.

Like many modern myths, the myth of right-brained and left-brained people is rooted in a bit of real science. We know the right and left sides of the brain actually do specialize in different kinds of tasks, although the real division of labor is much more complex than creativity on the right and logic on the left. Much of our knowledge in this area comes from the study of so-called split brain patients. In the 1940s doctors discovered that by surgically severing the corpus callosum (the bundle of nerve fibers that connects the two hemispheres of the brain) seizures could be reduced in patients with otherwise unmanageable epilepsy. (The procedure is seldom performed today because new drugs and treatments have been developed.) After the operation, the patients had normal intellectual and emotional functioning and seemed to have only mild impairments. More thorough examinations, though, revealed specific disruptions in perception and cognition that illuminated how the two halves of the brain differ from each other and how they cooperate. Generally, the right hemisphere of the brain was found to be more proficient at spatial tasks, while the left side of the brain was found to be the center of language and problem-solving. (Read a detailed summary of this research here.)

If there’s no evidence for the myth of right-brained and left-brained people, why do so many people believe it? Perhaps it just makes intuitive sense that people’s brains would be dominant on one side or the other just as their hands, feet, or eyes are. It may also have something to do with our seemingly unlimited appetite for schemes that allow us to sort ourselves (and our friends) into “types” based on our emotional and intellectual characteristics. Most of these (the Myers-Briggs personality test, for example) have about as much scientific validity as horoscopes, but they exploit a psychological phenomenon known as the Barnum Effect (or sometimes the Forer Effect): When people are offered generic descriptive statements that are presented as individualized descriptions of their own personalities, they are predisposed to accept them as meaningful and true, especially if the statements are positive. (The psychologists who studied this phenomenon gave out fake personality tests and found that people generally rated the bogus feedback as accurate.) The right-brain/left-brain myth works in a similar way. The “insights” that it generates are both generic and flattering. After all, who would reject a description of themselves as “spontaneous and intuitive” or “rational and analytical”? The myth is popular, in the end, because it gives us a “scientific” way to talk about our favorite subject—ourselves.