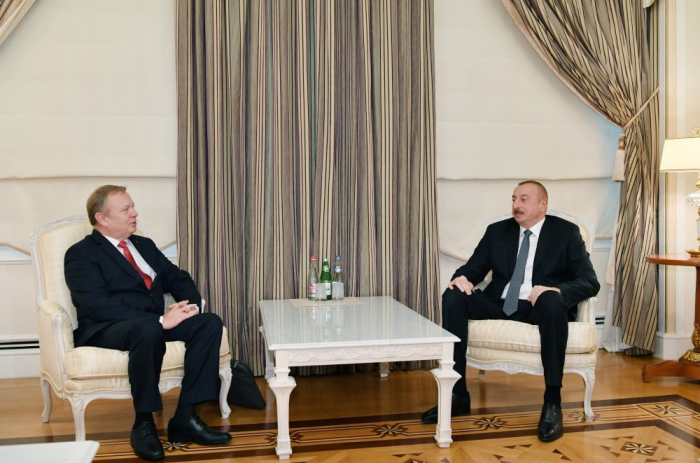 - Dear Mr. Ambassador. In the near future, I will pay an official visit to Belarus. We in Azerbaijan attach great importance to the upcoming visit, and in the run-up to the visit, I invited you to discuss the visit program and also some aspects of our bilateral relations. We see and know that Belarus attaches great importance to the upcoming official visit of the President of Azerbaijan. Just recently, President of Belarus Alexander Lukashenko invited the Ambassador of Azerbaijan to the Republic of Belarus also to express his views and discuss issues related to the upcoming visit. We are meeting today, and as an experienced diplomat, you will know quite well that this is a rare practice in relations between countries. It is an indicator of the high level of our relations, a high level of respect and mutual trust.

The fact that this will be my fifth official visit to Belarus and Alexander Grigoryevich has paid four official visits to Azerbaijan is, I think, the best indicator of how dynamically and successfully our relations are developing.

Our relations cover many areas. We actively interact in the political plane. As I have already noted, the level of mutual trust is so high that we are discussing all issues on the bilateral agenda, regional and international issues. There are good indicators in the economic sphere. The growing turnover is a good example. There are also trade missions of Belarus in Azerbaijan and of Azerbaijan in Belarus. I also believe that industrial cooperation is registering exceptional efficiency. The projects we have outlined together with Alexander Grigoryevich have been implemented. This strengthens the industrial potential of Azerbaijan today. The same holds true for the fields of education, science and culture. In other words, our countries enjoy full-fledged relations today.

Our cooperation in the military-technical sphere is also an important factor in our relations. We buy military equipment in Belarus and are very pleased with its quality and performance. Belarus demonstrates a very high level in the sphere of military industry as well, and we intend to continue cooperating in the military-technical field. As you know, however, this has been causing psychosis fits in Armenia, so to speak, which is extremely surprising because Azerbaijan buys weapons not only in Belarus. The biggest supplier of military equipment to Azerbaijan is Russia. We also acquire large quantities of weapons and equipment in Turkey, Israel, Pakistan and European countries. It is therefore surprising that claims are leveled exclusively against Belarus. I believe that this is a manifestation of an inferiority complex in Armenia in relation to Belarus, and the reasons are quite simple – both Belarus and Armenia gained independence at the same time. Today, Armenia is one of the poorest countries in the world, it is at the very bottom, and vivid evidence of that is the fact that the government, which exploited its people and looted it for 20 years, has been swept away by the Armenian people. In the meantime, Belarus, despite the sanctions imposed on it earlier, has successfully developed, and this is the result of the wise policy of President of Belarus Alexander Grigoryevich Lukashenko. Belarus has become a powerful state with a developed industry, a developed agriculture and a high level of social protection. As someone who has often visited your country, I say this completely objectively and sincerely. Therefore, it seems to us that the unfounded claims that are being voiced to your country by Armenia are based precisely on this factor.

Of course, we are observing the situation in our region. We also closely observed the CSTO summit recently held in Kazakhstan. We are not indifferent to this, which I think is quite understandable because Armenia is a country that has occupied the territories of Azerbaijan. Of course, we are not indifferent to the issue of who, a representative of which country, heads the CSTO, which is a military-political organization. The discussion of these issues between partners and friends is natural. We are discussing other issues of international politics. This should not cause any manias in Armenia. We consider the recent statements of the Armenian Ministry of Foreign Affairs as completely inadmissible in international practice. The Ministry of Foreign Affairs cannot comment on the actions and words of the President of another country, especially since it is considered an ally, and describe them as being incorrect. In fact, it is the behavior of the Ministry of Foreign Affairs of Armenia that is incorrect, as it allows itself such escapades. Apparently, this is the result of a wrong perception of the world and them own place on the world map. At the same time, as you know, the Armenian side has stated that there is a problem in the CSTO. Surely, they are right in that. First of all, these problems are Armenia itself and the problems it has created. Of course, we were a little wary of the appointment of a representative of Armenia to the post of secretary general of the CSTO. First, because this state conducts a hostile policy against Azerbaijan, and second, due to the identity of the candidate who was prosecuted for his actions. We have no doubt, so to speak, about the qualities this character possessed and still possesses. Suffice it to recall his shameful behavior during the battles between the Azerbaijani and Armenian armies, which ended in a bitter defeat for the Armenian army, the army led by the former CSTO secretary general. In other words, the very appointment of this person to such an important international organization as the CSTO somewhat discredited the organization. And the way this man was expelled with criminal prosecution is quite unique in international practice when an international official was brought to justice like that without sending any notification to member countries. So I want to say again that the main problem, if there is a problem in the CSTO, is Armenia itself and the problems it has created.

As for our relationship, it is unshakable. They rest on a solid foundation of on friendly relations, the relations of mutual respect and mutual support, and are aimed at the future. And I am sure that my upcoming visit to the friendly country will further strengthen our relations. The visit agenda is very extensive. Many documents will be signed and, I am sure, will be implemented in the same way as all our previous agreements.

Thank you for the opportunity to meet with you on the eve of your visit to Belarus, which we very much look forward to. I am delighted with your assessment of our bilateral relations. During the previous visit in 2016, you and Alexander Grigoryevich set a very high plan for us, and I am glad that although it was very difficult, we have completed all of these tasks in full.

The trade between our countries has increased by more than three times. Azerbaijan’s exports to the Republic of Belarus exceeds the indicators of last year, which was also a year of progress, by 50 per cent. I absolutely agree with you that it would be probably difficult to find a sphere where our relations would not develop – from industry and agriculture to high technology. There is a good momentum in humanitarian cooperation. There is mutual growth in tourism, sport and cultural exchanges. Azerbaijani and Belarusian actors often perform in the most prestigious theaters and concert studios of each other.

We are getting ready for your visit to Belarus. Preparations are well under way and are in the spotlight of our governments. I think that the agreements and projects prepared for signing will give a new impetus to our cooperation. Belarus and Azerbaijan are open to cooperation with each other. I am pleased to note that you, Mr. President, and President of Belarus Alexander Grigoryevich Lukashenko are always guided by the principle that our cooperation, both bilateral and multilateral, should have a constructive beginning and not be aimed against other countries or blocs. Both you and the President of Belarus always strive to ensure that the development of relations with other countries should be based on the norms and fundamental principles of international law, that all conflicts are resolved in a constructive spirit, progressively and peacefully. I am pleased to note that there are certain advances in this direction.

We can always count on the support of our Azerbaijani friends, including international formats. Similarly, we always support Azerbaijan at various international platforms – through the UN, the OSCE, the Council of Europe. We always feel that. Therefore, we will be very glad to see you in the Republic of Belarus. I think that the visit, especially at a time of the 25th anniversary of the establishment of diplomatic relations between our countries, will give an even stronger impetus to the ongoing development of our bilateral relations. Thank you very much.