Brexit linked to a rise in antidepressant use, study finds 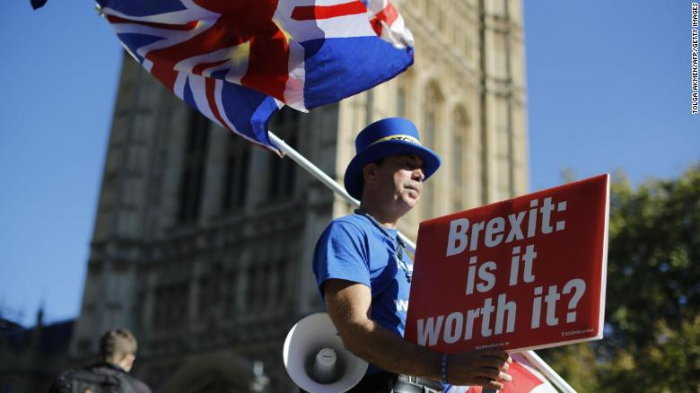 The number of antidepressants prescribed in England rose after the United Kingdom's vote to leave the European Union in 2016, a new study finds, CNN reported.

The researchers believe that this may be due to uncertainty over the future of the country and say more health services should be made available.

But experts the link to Brexit and instead believe that wider austerity in the country could be an underlying factor.

Researchers at King's College London and Harvard University wanted to examine whether the Brexit vote, deciding whether the UK would leave the European Union, on June 23, 2016, had any effect on mental health in England, as previous studies have looked at economic uncertainty and major social events affecting people's health and mental well-being.

The researchers looked at monthly prescribing data for each July from 2011 through 2016 for all 326 voting areas in England. They analyzed antidepressant prescriptions and compared them with prescriptions for drugs treating conditions unlikely to be influenced by uncertainty or depression, such as gout, iron deficiency and thyroid problems.

Both groups showed an increase every year before the referendum. But antidepressant prescriptions continued to increase after the vote, albeit at a slower rate than before, while other drugs experienced a decrease.

Antidepressant prescriptions rose 13.4% faster than the other drugs monitored, according to the study, published Tuesday in the BMJ.

"This study adds to previous studies that show that events at the national level can have an effect on people's mental health or mood," said Sotiris Vandoros, senior lecturer in health economics at King's Business School and lead author on the study.

Vandoros believes that the Brexit referendum may have triggered the increase in antidepressant prescriptions.

But the findings are open to interpretation, as they are based on trends and can't prove causation, Vandoros added, nor do they imply an overall increase in depression for the entire country.

The study instead shows that "people who were negatively affected by the referendum and might have started feeling worse" ended up driving an increase in antidepressants, he said.

The main cause of worry around Brexit is the question of what will happen afterward. Other causes of stress include economic uncertainty, job opportunities, companies relocating and whether EU nationals will have the opportunity to stay in the UK.

"All this uncertainty is going to cause people stress and anxiety and worry, and some people might end up feeling more depressed due to this," Vandoros said.

The trend shows that for some people, the referendum could be linked to a worsening of mental health, he said. However, others also became happier after the vote, and this development just isn't captured in antidepressant prescriptions.

It's hard to explain why there was a drop in prescriptions for other classes of drugs compared with antidepressants, Vandoros said. One possible reason is that people were distracted after the Brexit vote and had less time to see their doctors and fill their prescriptions.

Vandoros added that in this scenario, people's distraction should have led to a decrease in antidepressants, which was not seen. "But possibly, all this uncertainty and depression balanced out that effect," he said.

Previous research by Vandoros found an increase in traffic accidents the first two days after austerity measure announcements, such as salary and pension cuts, for reasons such as increased anxiety, stress and sleep deprivation.

"Clearly, it's very difficult to make a concrete link between Brexit and antidepressant use," said Ian David Cummins, senior lecturer in social work at Salford University, who was not involved in the study. He believes that this is because Brexit in itself is a very complicated event, but depression and why people are seeking advice and medication are also complex matters.

Cummins added that the study needs to put the Brexit vote in the context of more widespread austerity and growing inequality in the UK.

"Austerity is a huge driver" of a lot of concerns, said Cummins, who published a research paper this year on the effects of austerity on mental health. Cummins' report concluded that austerity and associated policies in the UK have increased the overall burden of mental distress.

A recent UN report stated that austerity in the UK has contributed to 14 million people, one-fifth of the population, living in poverty.

People could be seeking help due to a range of reasons, including welfare service reductions, greater pressure at work or from housing pressures, Cummins explained.

Kamaldeep S. Bhui, professor of cultural psychiatry and epidemiology at Queen Mary University of London, pointed out that the study mainly looked at antidepressant prescriptions, which is "not a perfect method" to measure mental health.

Antidepressant monitoring data is not very accurate, and there are many reasons people may take such drugs, explained Bhui, who was not involved in the new research.

Allan Young, professor of mood disorders at the King's College London's Institute of Psychiatry Psychology & Neuroscience, noted that "antidepressant prescriptions have risen in England consistently over recent years, and these data may simply reflect that rather than one single event."

"It should be noted that antidepressants are prescribed to treat anxiety disorders as well as mood disorders, and it is credible that people may be more anxious because of recent uncertainty in society," said Young, who was not involved in the research.

"Levels of anxiety across the population were not reported in this study so cannot be shown explicitly," he added.

Uncertainty is widespread globally. A Deutsche Bank report from January states that economic policy uncertainty in Europe has risen to "extraordinarily high levels."

People whose mental health is most affected by uncertainty are usually lacking a safety net of financial or emotional support through friends or family, Vandoros said.

One in four British adults who has a mental health problem also has problems with debt, according to UK charity Money and Mental Health. Nearly a quarter -- 24% -- of people experiencing depression or anxiety are in problem debt, the charity says. The mental health impacts of financial difficulties are wide-ranging, including anxiety, insomnia and substance abuse.

"Fear of losing your job is a major predictor of poorer mental health," Vandoros said.

Therefore, the new study fits into a larger body of evidence showing that mental health, mood and well-being can be affected by national events like elections, he said.

The researchers urge that "policies supporting mental health should be intensified in periods of uncertainty," as events such as Brexit also affect psychological well-being, which in turn impacts economic performance and social cohesion.

Bhui said that the study is an "important signal" and that "politicians need to be more careful about decision-making, as it can affect health."