Why is the ocean salty? -iWONDER 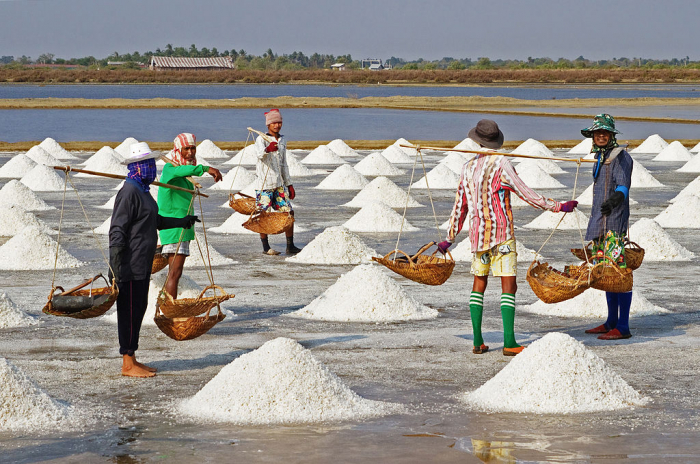 “Water, water everywhere,/ Nor any drop to drink.” This famous line, spoken by the lost sailor in Samuel Taylor Coleridge’s poem The Rime of the Ancient Mariner, sums up one of the basic difficulties of life at sea: humans need water to survive, but seawater is too salty to drink.

In fact, most of Earth is covered with undrinkable water; oceans cover 70 percent of Earth’s surface and account for about 97 percent of all water. The average salt content of ocean water is 35 parts per thousand, which—while it may not sound like much—works out to 120 million tons of salt per cubic mile of seawater. And there are about 332,519,000 cubic miles (1,386,000,000 cubic km) of water in the ocean. Where did all that salt come from?

It comes from the land, mostly. As rain forms and falls through the air, it accumulates carbon dioxide from the atmosphere, causing it to become slightly acidic. It then flows over the land, eroding rocks and picking up small amounts of salt and other dissolved minerals. At this point, the water is still basically fresh; there is some salt in it but usually not enough to make it undrinkable. Eventually, though, most rainwater finds its way to the ocean. Once it gets there, some of the dissolved minerals—such as calcium—are removed from the water by biological processes, but salt tends to remain. Additional salt is contributed by underwater hydrothermal and volcanic activity.

The idea that salt was gradually deposited in the sea by rivers was first suggested by the British astronomer Edmond Halley in 1715. Halley took his observation a step farther and proposed that salinity of seawater could serve as a kind of clock that could be used to determine the age of the ocean (and thus, he assumed, Earth). He reasoned that dividing the total volume of ocean water by the rate at which salt was deposited in the ocean would show how long it had taken for the ocean to reach its current level of salinity. Measurement techniques weren’t precise enough to perform the calculation in Halley’s time, but the Irish physicist John Joly tried it in 1899, coming up with an estimate of 90 million years. (More-advanced techniques later revealed this to be a major underestimate; the actual age is more like four billion.) Unfortunately, Halley’s scheme had been flawed from the start; among other problems, he had failed to account for the fact that some sea salt becomes sequestered in the form of mineral deposits on the seafloor.