Trade between Azerbaijan, Serbia grows by 33% 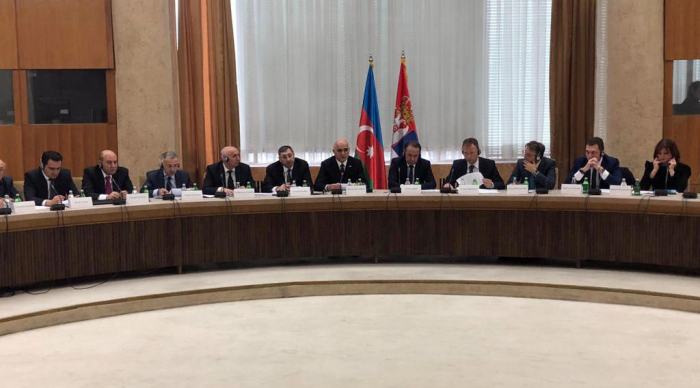 The ministry was commenting on the fifth meeting of the Azerbaijan-Serbia intergovernmental commission on trade and economic cooperation.

Prior to the meeting of the intergovernmental commission with the participation of delegations led by co-chairs of the commission – Azerbaijani Economy Minister Shahin Mustafayev and deputy prime minister of Serbia, Minister of Trade, Tourism and Telecommunications Rasim Ljajic - a round table meeting was held with participation of Serbian companies.

During the event, information was provided on the favorable environment for business and investment created in Azerbaijan, and the development of ties between the business circles of Azerbaijan and Serbia, the expansion of bilateral cooperation in business sphere were discussed.

On the same day, the fifth meeting of the intergovernmental commission was held.

Speaking at the meeting, Mustafayev noted that the relations between Azerbaijan and Serbia are based on the principles of mutual friendship and respect, and the heads of state of both countries attach great importance to cooperation.

Mustafayev stressed the importance of the visit of Azerbaijani President Ilham Aliyev to Serbia in 2011 and President of Serbia Aleksandar Vucic to Azerbaijan in 2018 in the development of bilateral cooperation.

During the last visit of the Serbian president to Azerbaijan, a number of important documents were signed in the fields of medicine and medical education, plant protection, international freight and air communications, and an Azerbaijani-Serbian business meeting was held, he noted.

It was noted that trade relations are also one of the main areas of cooperation between the two countries.

The trade turnover between the two countries grew 36 percent in 2017, and by 33 percent for the nine months of 2018. Azerbaijan and Serbia are making mutual investments, Mustafayev said.

Azerbaijani company Azvirt participates in infrastructure projects in Serbia, he noted, adding that cooperation in the field of tourism is also developing.

In 2017, the number of Serbian citizens visiting Azerbaijan increased by 14 percent, he said. Citizens of Azerbaijan can visit Serbia without a visa, while citizens of Serbia can use the opportunities of the ASAN Visa system during their visit to Azerbaijan, he noted.

In turn, Ljajic in his speech stressed that Serbia attaches great importance to relations with Azerbaijan.

He noted the expansion of trade and economic cooperation, the possibility of interaction in the fields of energy, agriculture, infrastructure, ICT, tourism and others.

Following the fifth meeting of the intergovernmental commission on trade and economic cooperation between Azerbaijan and Serbia, a protocol was signed. The document was signed by Shahin Mustafayev and Rasim Ljajic.

During the visit to Serbia, the Azerbaijani delegation met with Minister of Healthcare Zlatibor Loncar.

At the meeting, information was provided on the possibilities of the Pirallahi Industrial Park created in Azerbaijan, and issues of cooperation with Serbian companies in the field of healthcare were discussed.