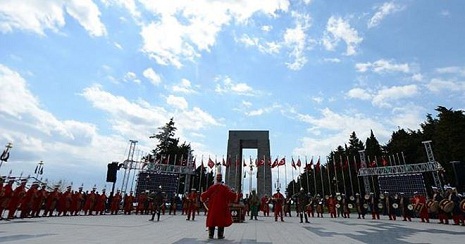 The centenary of the Gallipoli operation is celebrated in Turkey today with the leaders of 21 countries and representatives of government of more than 50 countries.

Dardanelles (Gallipoli) operation which lasted almost a year began in April 1915, it was an important episode in the First World War.

Britain, France and their allies didn`t achieve the desired result - capture of the Dardanelles Strait - because of the stubborn resistance of the Turkish troops. Their success at the Battle of Gallipoli (Canakkale) was crucial for the operation, which ended with the withdrawal of foreign troops from the territory of Turkey.

A ceremony at the memorial to those killed on the Gallipoli Peninsula in northwestern Turkey will be attended by the President of Azerbaijan Ilham Aliyev, President of Turkmenistan Gurbanguly Berdimuhamedov, President of Pakistan Mamnoon Hussain, President of Ireland Michael D. Higgins, president of Iraq Fuad Masum, the Emir of Qatar Tamim bin Hamad Al Thani, the Prime -Minister of Australia Tony Abbott, Prime Minister of New Zealand John Key, the Prince of Wales Charles and other foreign leaders. Russia will be represented at the ceremony by the Chairman of the State Duma Sergei Naryshkin.