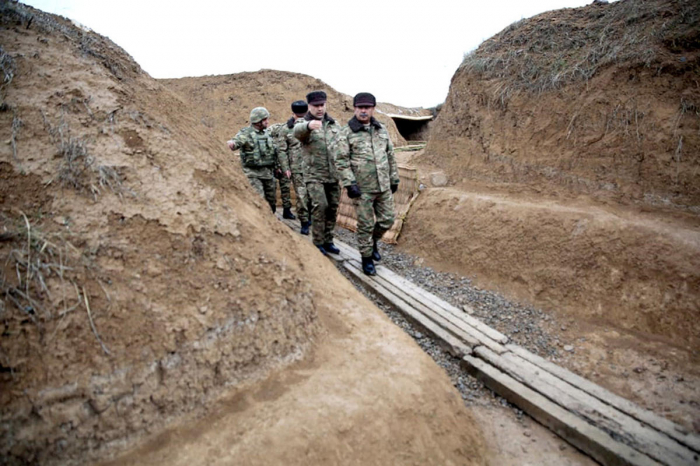 The leadership of the Ministry of Defense, according to the instruction of President of the Republic of Azerbaijan, Supreme Commander-in-Chief of the Armed Forces Ilham Aliyev, visited military units located on the Fuzuli direction of the frontline and met with military personnel on the eve of the Day of Solidarity of World Azerbaijanis and New Year, AzVision.az reports citing the press service of the Defense Ministry.

The ministry officials visited the memorial of the martyrs died in the April 2016 battles with Armenian invaders, paid tribute to the memory of the martyrs who sacrificed their lives for the sovereignty and territorial integrity of the Azerbaijan.

During the meeting with the teachers and pupils of the school in the village of Jojug Marjanli, the Minister of Defense, Colonel General Zakir Hasanov congratulated them on the upcoming holidays and presented holiday gifts to the schoolchildren.

Hasanov met with military personnel who are on combat duty, checked the defense stability, combat and moral-psychological training of servicemen, as well as observed the enemy’s positions from the command and observation post.

After talking to the soldiers, Hasanov inquired about the progress of work carried out in connection with improving the social conditions of the military personnel serving on the front line and gave relevant instructions.

Colonel General Hasanov, expressing his best wishes and congratulations on the upcoming holidays, awarded servicemen who distinguished themselves in the service and handed them valuable gifts.

Then, the minister met with military personnel undergoing treatment at a military hospital located in the frontline zone and inquired about their health. The minister handed gifts to the servicemen and wished them a speedy recovery and return to service.