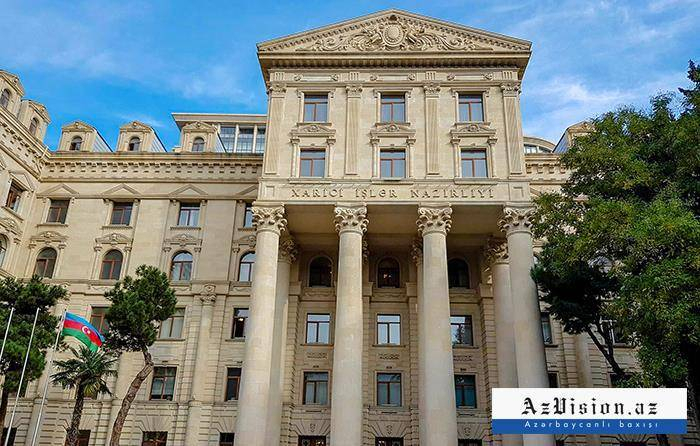 Serious problems, which have recently emerged in Armenian-Russian relations and, on the contrary, the successful development of Azerbaijani-Russian relations (last year alone, the presidents of the two countries met six times), apparently, worries some individuals in the Russian Foreign Ministry, Azerbaijani Foreign Ministry’s spokeswoman Leyla Abdullayeva told on Jan. 11.

She was commenting on the remarks made by the official representative of the Russian Foreign Ministry Maria Zakharova about the non-admission of citizens of the Russian Federation of Armenian origin to the territory of the Azerbaijan Republic.

“The Ministry of Foreign Affairs of the Russian Federation is well aware that for many years Armenia has been pursuing a policy of aggression against Azerbaijan, as a result of which the Nagorno-Karabakh region of Azerbaijan and seven adjacent administrative districts were occupied, more than one million people were subjected to ethnic cleansing and became refugees and IDPs. As a result of the Khojaly genocide committed by the Armenian armed forces on February 26, 1992, 613 civilians, including young children, women and the elderly, were brutally killed. The four resolutions of the UN Security Council adopted in 1993 (822, 853, 874 and 884) demand the immediate, complete and unconditional withdrawal of the Armenian occupying forces from the occupied territories of Azerbaijan and the return of those forcibly expelled from these territories to their native lands. The Russian Federation, as a permanent member of the UN Security Council, voted for the adoption of these resolutions. However, for over 25 years, the requirements of these resolutions have not been fulfilled and the Azerbaijani lands are still under occupation,” said Abdullayeva.

Azerbaijan is known in the world as the center of multiculturalism, she said, adding that Azerbaijan, unlike Armenia, is a multinational state.

“Representatives of many nations, including Armenians, live together in peace and harmony in the Republic of Azerbaijan. Currently, more than 30,000 Azerbaijani citizens of Armenian origin live in our country. This is while Armenia is a mono-ethnic state. The efforts and activities of Azerbaijan in this sphere have always been highly appreciated by Russia in numerous bilateral meetings at the level of heads of state. While children of Armenian origin face restrictions in receiving education in Russian-language schools in Armenia, there are more than 340 Russian-language educational institutions in Azerbaijan. Such schools can be counted on the fingers in Armenia. Azerbaijan is always open to Russian citizens,” said Leyla Abdullayeva.

According to the spokeswoman, only in 2018, 880,000 Russian citizens visited Azerbaijan, and there were no complaints by them on the issue raised.

Abdullayeva expressed regret that the official representative of the Ministry of Foreign Affairs of the Russian Federation was not the first time to make statements contradicting the spirit of bilateral strategic relations.

"On the background of development of Azerbaijani-Russian relations, this statement and attempts to inflate some particular case, taking it out of the general context, are another manifestation of the general trend we have indicated.

A representative of the Russian Foreign Ministry said that "the Azerbaijani side promised that this situation would be corrected." "We strongly refute this. Azerbaijani-Russian relations are based on equality, and the expression “correct the situation” contradicts the essence of equal bilateral relations. We are convinced that the next provocative and anti-Azerbaijani statement by the official representative of the Russian Foreign Ministry will not have a negative impact on relations between Azerbaijan and Russia. Azerbaijani-Russian relations are determined not by the foreign affairs structured, but by the presidents of Azerbaijan and Russia, and both sides are very interested in developing these relations and are making efforts in this direction," she concluded.