EC Vice-President: "The Southern Gas Corridor is a strategic project for EU" 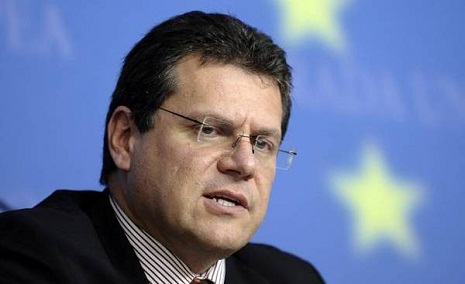 The vice-president of the European Commission for Energy Union Maros Shefchovich (Maroš Šefčovič) said on Thursday in Ashgabat that the EU intends to begin natural gas supply from the Caspian region to Europe in 2019-2020. AzVision.az reports quoting RIA Novosti.

After the talks with Turkmenistan President Gurbangulu Berdimuhamedov, Shefchovich said in an interview to TV that he discussed with the president the strengthening of partnership between Turkmenistan and the EU in the energy sector, as well as exchanged views on the EU program for the diversification of energy supplies to the European market.

"Specifically, we found "The Southern Gas Corridor is an important and strategic project for us, because it is able to diversify energy sources and energy direction. We want to began natural gas supply from the Caspian region to Europe in 2019-2020", - said European Commissioner for Energy.

He said, the upcoming meeting of the representatives of Azerbaijan, Turkey, Turkmenistan and the European Union on May 1 will be devoted to the implementation of a project to supply natural gas from the Caspian region to Europe.

Shefchovich stressed that during the quadripartite meeting is planned to discuss issues of cooperation between the parties within the framework of this project.

European Commissioner also said that during the talks with the head of Turkmenistan discussed the possibility of building a gas pipeline through the Caspian Sea and through the territory of Iran.

According to him, diplomatic relations with Iran are developing positively, and the EU hopes that the talks between Iran and “Six” will be successfully.

He said, the Nabucco project has faced a number of difficulties, because its implementation has been neglected.

Shefchovich stressed that the Commission address the major European gas companies to determine their commercial interests and a desire to participate in these projects.

He expressed hope that the efforts of the European Commission in this direction will be more insistent than before.

Shefchovich also said in an interview that he had discussed with the President of Turkmenistan, the potential environmental risks associated with the construction of a gas pipeline across the Caspian Sea (Trans-Caspian gas pipeline).

He said, research specialists have good results, and they have shown that the gas pipeline does not bear the environmental threats the region.