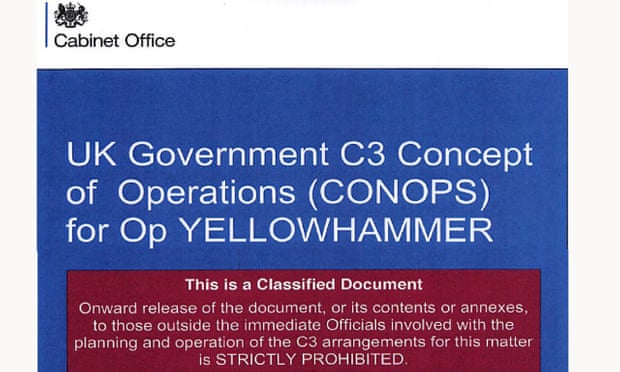 The extent and range of the impact of a no-deal Brexit is revealed in a confidential Cabinet Office document that warns of a “critical three-month phase” after leaving the EU during which the whole planning operation could be overwhelmed.

The classified document, seen by the Guardian, sets out the command and control structures in Whitehall for coping with a no-deal departure and says government departments will have to firefight most problems for themselves – or risk a collapse of “Operation Yellowhammer”.

“The … structure will quickly fall if too many decisions are unnecessarily escalated to the top levels that could have reasonably been dealt with internally …” the document says. It also concedes there are “likely to be unforeseen issues and impacts” of a no-deal Brexit that Operation Yellowhammer has been unable to predict.

The Cabinet Office has taken the lead in preparations for no deal and is desperately war-gaming scenarios in the event the UK leaves without a coherent plan.

The document includes a flow-chart of a routine no-deal day in Whitehall – which starts at 7am with “situation reports” from across the UK being sent to ministers and senior officials, and continues with non-stop assessments and meetings until 5.30am the following day. This high tempo is likely to be necessary for months, the document says.

One source with knowledge of Operation Yellowhammer made clear that while planning had stepped up, the overall picture remained chaotic and “rudderless”.

Preparations for no deal have become time-critical because of the political deadlock at Westminster.

Kent county council has run “live” tests to see how schools, hospitals and morgues would cope with 10,000 lorries being parked on roads near to busy ports.

On Thursday it emerged that the Ministry of Defence has set up a bunker underneath its main building in Whitehall to coordinate any military response to Brexit.

The moves highlight growing concern about the disruption that could be caused by a no deal – with potential shortages of everything from medicines to fresh food and toilet paper.

In an attempt to mitigate these risks, the Cabinet Office has devised a “high-level concept of operations” manual for command, control and coordination by Whitehall for any problems that are likely to arise.

The Guardian understands this manual has been circulated to senior officials across government, but also to the 38 local resilience forums that will be charged with identifying and dealing with problems on the ground. Many of these LRFs may have to be led by senior police officers.

The document warns that agencies and government departments must assume they will be working non-stop for an extended period. The 12 high-risk areas that have been identified as being of particular concern include transport, healthcare services, and food and water supplies.

“Under the planning assumptions it is assumed that the command, control and coordination arrangements might last, during the critical phase, for a minimum of 12 weeks and might require 24/7 working for all involved departments and agencies,” the document says. “Some impacts may be felt for up to 24 weeks.” 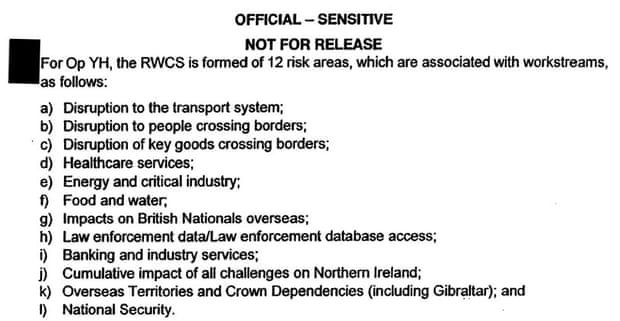 The most important decisions in response to any potential crisis will be taken by the little-known European Union exit and trade (preparedness) subcommittee, which was set up in January, and is chaired by the prime minister.

That will have sweeping powers to intervene and order emergency measures, including mobilising the military, and getting rid of regulations if necessary, the document suggests.

“The committee will be available to take an overview of the situation and make any relevant decisions including on the following areas but not limited to legislation, identifying funding opportunities, allocation of national level resources (such as military, law enforcement or civil service resources, direction of government bodies and relaxation of regulations required at the ministerial level.”

But the document emphasises that departments cannot just palm off problems to the Cabinet Office, and will have to staff their own ”department operations centres”, and fund any initiatives from existing budgets.

“Departments retain the risks and the accountability for managing issues within departmental resources and structures,” the document states.

In separate guidance also seen by the Guardian, the Cabinet Office has told the local resilience forums that it wants them to immediately report certain types of information up the chain of command. This includes any signs of an increase in community tensions and hate crime, panic buying, protests and demonstrations.

“The information is requested to assist departments and ministers understand the nature and scale of impacts which may be occurring,” the guidance says.

The Department of Health has also issued every clinic and hospital in England and Wales with a form that poses 60 questions. This has to be filled out on a daily basis and sent to senior officials.

‘Unforeseen issues and impacts’ of a no-deal Brexit are highlighted by the document. Photograph: Cabinet Office

Sources said this planning was likely to be too little, too late.

With time potentially running out, a key concern is that central government is not telling local authorities what to prioritise.

“Central government is not providing leadership,” said the source. “At the moment we are trying to plan for everything. There is no direction of accountability. The response to a no-deal Brexit needs to be built from the bottom up.” A government spokesperson said: “As a responsible government we have been planning and continue to prepare for all eventualities, and that includes managing the impacts of a no-deal Brexit if they arise.

“We have taken action to ensure that local leaders have access to additional resources and support, should they require it. This includes pledging over £58m to assist their Brexit preparations.”

The Cabinet Office said the Ministry of Housing, Communities and Local Government was holding weekly calls with LRFs to share information, including the latest from across Whitehall on Brexit preparedness, and LRFs were able to raise any local concerns.

It said the EU exit local government delivery board, chaired by the communities secretary, James Brokenshire, was meeting regularly and allows council leaders to directly speak to ministers about domestic Brexit preparations.