Ban Ki-moon to visit Moscow on May 9 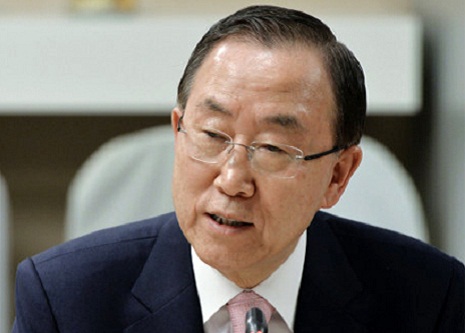 After his departure for Moscow, the secretary general would make stopovers in Poland and Ukraine
UN Secretary General Ban Ki-moon will visit Moscow to participate in the festivities marking the 70th anniversary of the Soviet Union’s victory over Nazi Germany and he is also planning to have a meeting with Russian President Vladimir Putin, Stephane Dujarric, the spokesman for the UN secretary general, told reporters on Monday.

The UN secretary general is going to pay a visit to Moscow for marking Victory Day on May 9, Dujarric said. While in Moscow, Ban will meet with Putin and heads of other delegations present at the celebrations.

Dujarric said that after his departure for Moscow the UN secretary general would make stopovers in Gdansk (Poland) and Ukraine’s capital Kiev on May 7 and 8 in order to meet Presidents Bronislaw Komorowski and Petro Poroshenko alongside other officials.

On May 7 Ban KI-moon will have meetings with President Bronislaw Komorowski and Polish high-ranking officials. On May 8 he will be in Kiev to meet President Petro Poroshenko and governmental officials.

In late April, TASS reported that the UN secretary general was going to pay a visit to Moscow on May 9. Later Ukrainian Foreign Minister Pavel Klimkin said that such a visit would "send a wrong signal to Kiev," expressing the hope that the world organisation’s head "will not be present at the parade [on Red Square] on May 9."

Dujarric avoided to give a direct answer to the question whether Ban Ki-moon had discussed the forthcoming visit with Ukraine. Instead, he said that the Soviet Union had colossal loss of lives in the war with Nazi Germany so the secretary general would be attending the festive events.

On May 2 Head of the Kremlin administration Sergei Ivanov said in an interview with the RT channel that fewer foreign guests would attend V-Day celebrations in Moscow this year than 10 years ago but it was more important for the Russian authorities to hold the festivities in a dignified manner primarily for citizens of Russia.

Meanwhile, at the UN Headquarters in New York a series of events are scheduled to take place. In the coming hours a photo exhibition featuring the Great Patriotic War the Soviet Union fought against Nazi Germany will be opened there. On Tuesday the 70th anniversary of the end of WWII will get in the spotlight at the UN General Assembly session.