Philippines recalls its envoys in Canada over tons of rotting garbage 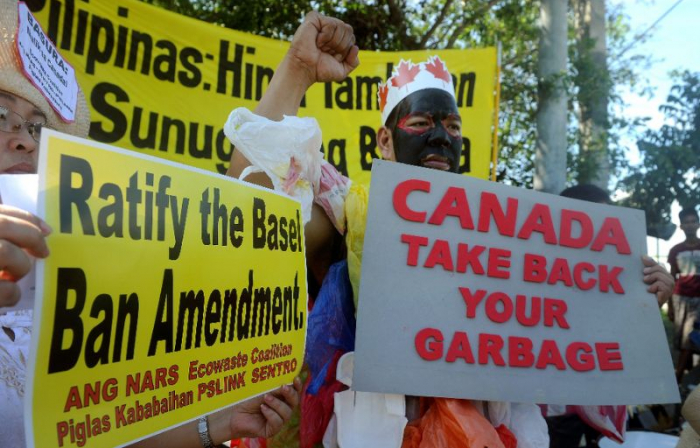 The Philippines recalled its ambassador and consuls to Canada after Ottawa missed a deadline to take back tons of unwanted trash that has been rotting near Manila for nearly six years, the country’s foreign secretary said Thursday.

“At midnight last night, letters for the recall of our ambassador and consuls to Canada went out,” Philippine Foreign Secretary Teodoro Locsin Jr. said in a tweet. “They are expected here in a day or so.”

Until the trash is Canada-bound, he added, the Philippines would “maintain a diminished diplomatic presence” in the country.

The move is the latest escalation in a long-simmering conflict that has weighed heavily on the relationship between the two countries and that has called into question Canada’s pro-environment reputation and its commitments to international treaties.

The dispute began in 2013, when Chronic Inc., a private Canadian company, shipped more than 100 containers labeled as plastics to the Philippines for recycling. A spot inspection by customs officials found that only about one-third of them were recyclable. The rest were crammed to the brim with household waste, including old wires and soiled, leaking adult diapers.

When Canadian Prime Minister Justin Trudeau visited Manila in 2015, shortly after he took office, he promised that a “Canadian solution” was in the works and that he would make legislative changes to ensure that such a thing could not happen again.

Canada tried to get the Philippines to dispose of the garbage without success. Then, in 2016, a Philippine court ordered Chronic to take the waste back, noting that the country was not a “trash bin.”

Pushed on the garbage issue on another visit to the Philippines in 2017, Trudeau said the “legal barriers and restrictions” that had prevented Canada from taking back the trash earlier had been addressed, so it was “theoretically” possible for Canada to do something about it.

Instead, the garbage continued to languish at a private landfill near Manila, where it has been reeking ever since, much to the chagrin of environmentalists and public health activists who have often staged protests outside Canada’s embassy there.

The protracted conflict ratcheted up – publically, at least – in recent weeks thanks to a bout of trash talk from Philippine President Rodrigo Duterte.

Last month, he threatened to “declare war” on Canada if it did not take back the trash.

“I want a boat prepared,” Duterte said at a press conference, tapping a conference table in frustration, before providing suggestions on what Canada might do with the garbage once it arrives.

“Prepare a grand reception,” he said. “Eat it if you want to.”

In response to Duterte’s comments, Canada said it offered to repatriate the waste and that it would front the necessary shipping costs, but that there were still various details to work out.

Last week, Salvador Panelo, a presidential spokesman, said the government of the Philippines had given Canada a May 15 deadline to remove the waste. In a statement, he said that if the Canadians dragged their feet any longer, he would ship the containers and “throw them to the shores or beaches of Canada.”

But until the tweets Thursday morning, there were few indications that an escalation of this kind was in the cards. At a press conference Wednesday, Panelo told reporters that while there could be a slight delay in Canada taking back its trash, “the important thing is, they are taking it,” according to Rappler, a Philippine social news website.

In a tweet, Locsin Jr. said “the trigger” for the recalling of the diplomats was news from the Department of Finance that Canadian officials did not show up to a customs meeting.

Global Affairs Canada did not respond to a request for comment.

A spokesperson for Canada’s Environment and Climate Change Ministry said in a statement that Canada “remains committed to finalizing arrangements” for the return of the waste and that it was still resolving “outstanding details, including legal and regulatory issues.”

Experts say that the dispute has blighted Canada’s reputation abroad, particularly because Trudeau has said that combating climate change and protecting the environment is near the top of his agenda.

Environmental groups in Canada and the Philippines say that Canada is violating the Basel Convention, an international treaty that outlines rules around the regulation of hazardous materials and waste to prevent developed countries from dumping their trash in developing countries without their consent.

Last month, the Pacific Centre for International Law and Litigation in British Columbia issued a legal opinion that said Canada had violated the convention because it inaccurately described the content of the containers and failed to take them back within 30 days of being notified of their contents.

In January, the EcoWaste coalition, a Philippines-based nonprofit, wrote a letter to Trudeau that noted that South Korea had also illegally dumped waste in the Philippines, but that unlike Canada, it had taken some of it back within that same year.

“The stark contrast between South Korea’s actions and Canada’s indifference to its dumped waste has captured public attention and stoked anger at what is viewed as both disrespectful and illegal conduct by Canada,” the letter said.