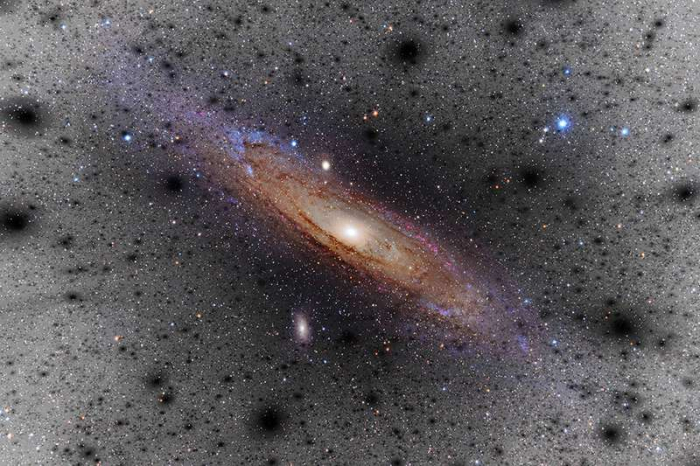 A ‘dense bullet’ of dark matter a million times larger than the sun may have plowed through the Milky Way, dragging stars out of line behind it, in an astrophysical model that explains a mysterious ’glitch’ in the galaxy.

The “galactic hit-and-run” theory explains the ragged gap discovered in GD-1, the longest stellar stream in the galaxy, according to Ana Bonaca, a fellow at the Harvard-Smithsonian Center for Astrophysics, who presented her theory at the American Physical Society last month. Instead of the single smooth-edged gap one would expect to find at the origin point of the stellar stream, GD-1 has a second gap, with a “spur” of stars hanging off, as if they were dragged by gravity behind some huge “dark impactor” barreling through the universe.

Why a gigantic blob of dark matter? “We can’t map [the impactor] to any luminous object that we have observed,” Bonaca explains, and “it’s much more massive than a star…a million times the mass of the sun.” That doesn’t rule out the possibility – “it could be that it’s a luminous object that went away somewhere, and it’s hiding somewhere in the galaxy” – but it would be hard to hide something 30 to 65 light-years across.

With no visible culprit on which to pin the celestial fender-bender, then, and no tell-tale signs of a black hole like the massive one believed to lie at the center of the Milky Way, Bonaca believes a large “clump” of dark matter could be responsible for the tear in GD-1. Despite researchers’ frustrating inability to “prove” the existence of dark matter, most agree it’s there and that it greatly outnumbers luminous matter, holding galaxies together and clustering at their centers.

Bonaca was able to pinpoint the space oddity by studying a galactic map from the Gaia mission, the most complete rendering of the Milky Way, and cross-referencing it with observation through a multi-mirror telescope capable of distinguishing the direction in which stars are moving. This method created the most precise image of GD-1 yet, and she hopes to map more of the Milky Way in the hope of turning up other areas where similar dark behemoths might have trundled through – eventually mapping the location of these dark matter “clumps” throughout the galaxy.