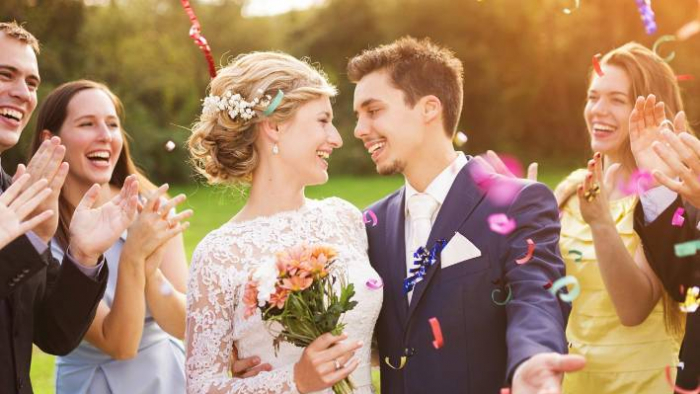 A survey, published by the Office for National Statistics (ONS) this week, shows that a person's marital status ranks only below good health as a key reason why people feel happy.

Marriage is a key factor for finding contentment, a new study suggests.

The data, which comes from an annual population survey for Great Britain from October 2017 to September 2018, found that marriage has overtaken economic wealth in the list of most important factors when people evaluate how fulfilled their lives are.

By contrast, a household survey from 2011-12 showed that someone’s employment ranked above marriage when it came to happiness.

Last year, ONS figures showed that the divorce rate for heterosexual couples in England and Wales had hit a 45-year low.

The news follows several studies in recent years which showed that single people tend to have stronger social networks, are fitter, and benefit more from alone time than their married and divorced peers.

A study published in 2008 in the British Medical Journal, found that people who had regular contact with 10 or more others were significantly happier than those who did not, and that people with fewer friends were less happy overall.

The latest study also showed that age is the personal characteristic most strongly related to happiness, with younger people reporting higher life satisfaction. The findings showed happiness drops to its lowest point when people are in their 40s and rises again as people near retirement age.People who own a home, whether it is outright or with

a mortgage, also rated their life satisfaction more highly than those living in both private and social rented housing.

In addition, people who spend money on hotels and restaurants score greater happiness ratings than those who spend more on insurance and mobile phone subscriptions.

While there is no evidence of an association between household disposable income and life satisfaction overall, higher disposable household income has a positive impact on the likelihood of people reporting being happy, if it is specifically between £24,000 and £44,000.

The ONS said that “how we spend our money matters”.

“[When] comparing people with the same level of spending, those able to spend a higher share on experiences – such as hotels and restaurants – are more likely to be very satisfied with life than those spending more on food, insurance and mobile phone subscriptions.”