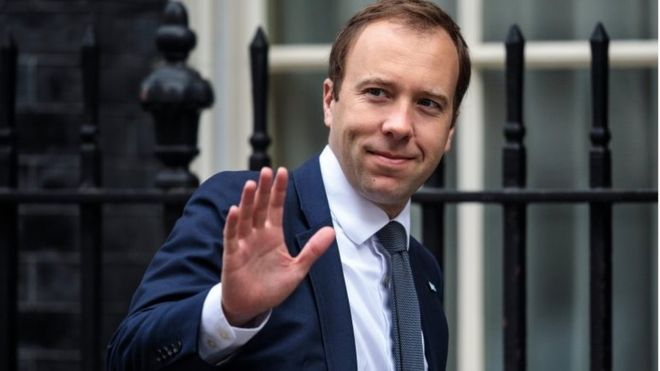 The health secretary, Matt Hancock, has pulled out of the race to be Britain’s next prime minister, but declined to throw his weight behind another candidate.

Hancock, who was the youngest of the seven contenders remaining after Thursday’s first round, had been considering his position overnight.

In a statement, Hancock said: “I ran as the candidate of the future, but the party is understandably looking for a candidate for the unique circumstances we face right now.”

“I have therefore decided to withdraw from this contest, and I will look for the best way to advance the values we fought for, of free enterprise, and an open, aspirational, free society, underpinned by an optimistic belief in the value of each individual person.”

He said he would think about his options over the weekend, and “talk to all the other candidates about how these values can be best taken forward”.

Moderate Conservatives have been discussing who can best challenge Boris Johnson, with some fearing the foreign secretary, Jeremy Hunt, who came second on Thursday, appeared to be too much of an “establishment” candidate.

Hancock held a meeting with Sajid Javid on Thursday, but sources in the health secretary’s campaign said the discussion had not been “fruitful”. Michael Gove’s team had also been making overtures to Hancock, believing their candidate could take on Johnson most effectively. Javid’s team argue he is a more convincing “change candidate”.

Hancock was a longtime adviser to George Osborne when the Conservatives were in opposition. He served as the culture secretary – famously promoting himself through an eponymous app – before becoming the health secretary.

Hancock picked up 20 votes in the first ballot of Tory MPs – enough to pass the threshold of 17 for continuing into the next round on Tuesday, but well short of the 33 needed to continue beyond that. His prominent backers included the de facto deputy prime minister, David Lidington.

Hancock’s pitch to his colleagues had been that he was best-placed to appeal to voters in the centre ground of British politics, but that meant appealing to a similar group of MPs to Rory Stewart.

Stewart received 19 votes but has said he is determined to continue with his quixotic #RoryWalks campaign, insisting he is the best person to take on fellow old Etonian Johnson.

Hancock told the Guardian on Wednesday: “Of course we’ve got to deliver Brexit; but then we’ve got to win a majority by appealing to aspirational people in the centre ground of British politics, where there’s a gaping hole.”

He added: “There are some candidates who won’t be able to bring the Conservative party with them, and there are others who will find it more difficult to reach into the centre ground. I think I’m best placed to be able to do both.”

Johnson’s progress to 10 Downing Street appears unstoppable, after he won 114 votes in the first round of the contest. But he is facing accusations of hiding from public scrutiny, having so far failed to confirm that he will take part in Sunday’s televised debate.