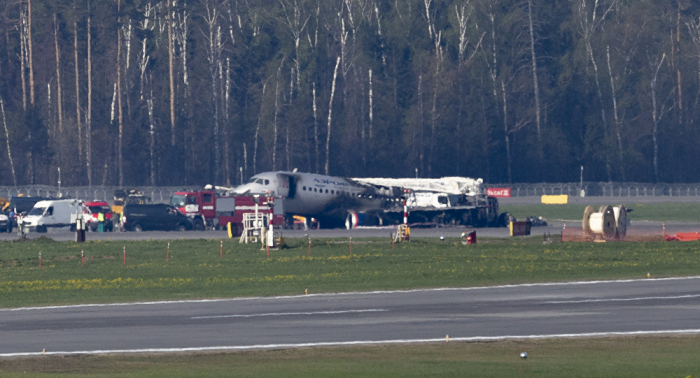 The automatic pilot system of the Russian Sukhoi Superjet 100 (SSJ100) aircraft presumably switched off after a lightning strike when the SSJ100 crashed in early May in Moscow during an emergency landing, the Russian Interstate Aviation Committee (IAC) said in its preliminary report on Friday.

"Examination of the fuselage, including its front section, assessment of the condition of antennas, detectors ... door floodlights and the glass panel of the pilots' cabin have revealed damage typical for lightning traces," the IAC said.

"Most likely, at that stage, the aircraft was hit by an electric charge. [At the same minute], the automatic pilot system switched off," the IAC added.

The committee further said that the crew of the Russian Sukhoi Superjet 100 (SSJ100) aircraft did not voice concerns over SSJ100 systems' operation after the flight prior to the crash.

"There was no criticism of the aircraft systems' operation by the crew during the previous flight. No additional work was carried out, and no postponed operations blank was registered. Technical maintenance included work on checking the existence and the serviceability of rescue equipment," the IAC said.

The SSJ100, bound for the northwestern Russian city of Murmansk, caught fire upon making an emergency landing at Moscow's Sheremetyevo airport following onboard electronics failure that it experienced less than 30 minutes after the take-off on May 5. The accident left 41 out of the 78 people on board killed.