Scores of protesters wounded and seven dead on Sudan's streets 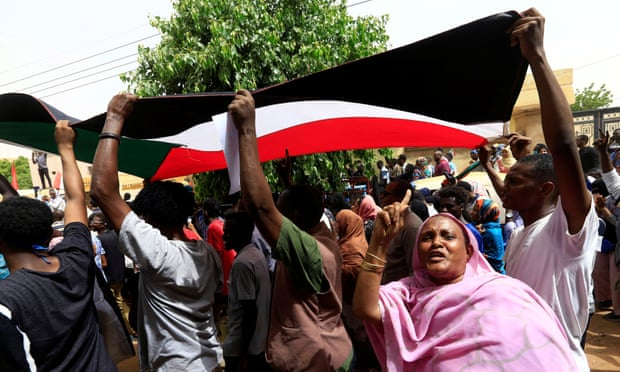 Seven people have died and nearly 200 have been wounded during huge demonstrations in Sudan, the first large-scale protests since a crackdown on a camp early in June left at least 128 people dead, Guardian reports.

Tens of thousands took part in protests across the country on Sunday. In Khartoum, the capital, protesters demanded that the ruling transitional military council (TMC) hand over power to civilians, as security forces fired teargas at them.

“Kabashi, you are a liar – the revolution has just started,” the protesters chanted, referring to the TMC spokesman Gen Shams Eddin Kabashi, and: “Blood for blood, we won’t accept compensation.”

Soliman Abdel-Gabar, acting undersecretary of health, reported Sunday night that at least seven people died during the day’s disturbances across the country. He said 181 people were injured, including 27 with bullet wounds. One of those who died in Atbara, in the River Nile state, north of Khartoum, was named as Khalid Awad, a 35-year-old father of three.

Protests against Sudan’s long-time dictator, Omar al-Bashir, began inAtbara in December, but since the military removed him in April it has refused to permit civilian rule.

Talks between the military and civilian representatives over a power-sharing agreement collapsed this month when security forcesused force to break up the Khartoum protests.

Sunday’s protests also coincided with the 30th anniversary of the Islamist-backed coup that brought Bashir to power. Demonstrators gathered at several points across the capital before heading to neighbourhoods where the families of those who had died in the protests lived to pay respects at the “martyrs’ houses”.

Protesters then moved to the airport avenue where they were blocked by more than 50 vehicles of police and the feared paramilitary Rapid Support Forces (RSF).

Bridges leading to central Khartoum were also closed following a call from the Sudanese Professionals Association, a trade union organisation and the main civilian group involved in the protests, for protesters to head to the presidential palace.

Enas Salah, who was protesting at the airport avenue along with thousands of others, said she was there because she was tired of the “lies of the TMC. They said [they] don’t want power. Let them show us that they don’t want it for real.”

Samah Said, 23, a university graduate, said she was there “not only because of the high prices – we are here because of our martyrs … when we went out to protest peacefully they shot and killed us.”

In Omdurman, the city across the Nile from Khartoum, thousands of people took to the streets. They were dispersed with teargas and the bridge was closed, blocking them from heading to central Khartoum.

Amjad Yousef, a protest organiser, said he would not “go back home unless all the demands of the revolution are met, by having a civilian government”.

Mohamed Hamdan Dagalo, known as Hemedti, who commands the RSF and is deputy head of the TMC, said three of his forces had been shot at. He said he would catch the perpetrators “and bring them to justice”.

Faisal Mohamed Salih, an analyst, said: “I did not expect this number of protesters to take to the streets but this shows that they have a strong and angry position.”

The new protest comes at a time when Ethiopia and the African Union (AU) are jointly mediating between the protesters and generals. Ethiopia and the AU have proposed a blueprint for a civilian-majority body, which the generals say could be a basis for resuming talks.

Mobilising protesters has become a challenge since the raid, with military rulers imposing a widespread internet blackout.

In the lead-up to Bashir’s fall, social media was used to get tens of thousands of protesters out on the streets, but now protest leaders are keeping the movement alive through neighbourhood campaigns.