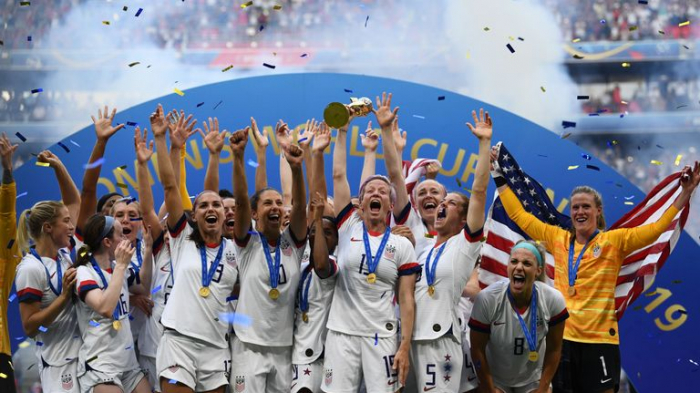 The United States won the Women's World Cup for a record fourth time as they eventually overpowered the Netherlands in Lyon, AzVision.az reports citing BBC Sport.

Megan Rapinoe's penalty and Rose Lavelle's fine run and finish gave the defending champions victory in the second half, after resilient first-half defending from the Dutch.

Veteran winger Rapinoe's calmly-slotted opener came from a spot-kick awarded after a video assistant referee (VAR) review, at the end of a tournament in which the system has been a major talking point.

Barcelona defender Stefanie van der Gragt's high boot caught USA striker Alex Morgan and French referee Stephanie Frappart pointed to the spot after assessing replays, and the holders did not look back after taking the lead.

The European champions, reaching the final in only their second World Cup, kept the favourites at bay in the first half as former Arsenal goalkeeper Sari van Veenendaal produced four excellent saves.

But the USA, playing in their third consecutive final, continued their reign as the world's finest side as they added to their titles of 1991, 1999 and 2015.

Rapinoe's goal also meant she won the Golden Boot after finishing with six goals and three assists, while she also took the Golden Ball award for the tournament's best player.