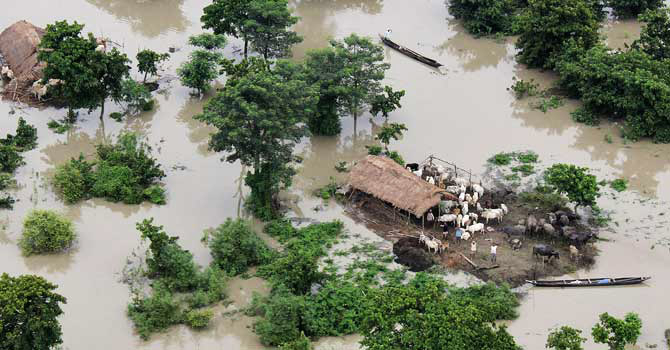 According to officials, around 1.5 million people were affected in the current wave of flooding in 25 districts and the death toll has risen to seven.

"On Saturday the flooding claimed one more life, taking the death toll to seven," an official said, adding that around 1.5 million people had been affected in 25 of Assam's districts.

Authorities have set up relief camps for the affected people.

"Over 20,000 people have been shifted to 68 relief camps so far," the official said. "Barpeta district is the worst-hit, with over five lakh (half a million) people displaced in it due to flooding."

Officials suspected the situation was likely to get worse amid predictions of more rainfall in the coming hours.

Authorities have pressed into service disaster response force personnel in the affected areas for search, relief and rescue operation.

"The rescue efforts are being led by the National Disaster Response Force (NDRF), which is actively evacuating people residing in low-lying areas to relief camps across the state," the official said.

The federal government has assured the local government in Assam of all possible help in tackling the floods.

"Chief Minister of Assam Sarbananda Sonowal yesterday called federal Home Minister Amit Shah over telephone and apprised him of the prevailing flood situation in Assam and measures taken by the state government," a local government spokesman said. "The home minister assured all possible support from the center to deal with the situation."

Meanwhile, Shah on Saturday chaired a high-level meeting to review the current flood situation in different parts of the country and the preparedness of the government agencies concerned to deal with the situation.

"After review meeting, home minister directed the senior officers to take every possible measure to deal with the situation arising out of Southwest Monsoon in the country and to extend all necessary assistance to the flood affected states," a Home Ministry official said.

According to India Metrological Department (IMD), during the past three to four days, Assam and Bihar have received excessive rainfall.

Heavy rainfall is expected in these two states in the next 48 hours, the IMD said.

Officials said 73 NDRF teams have been pre-positioned in vulnerable areas of flood-affected states along with all necessary equipment.

Officials said ferry services across Assam have been halted since Friday to prevent accidents due to the strong water currents in rivers.

Wildlife officials said over 80 percent of the Kaziranga National Park has been submerged in the floods. The animals have taken shelter on platforms constructed for their safety during the floods.

Officials said over 27,000 hectares of farmland are under floodwater.

Floods are an annual occurrence in Assam during the monsoon season.