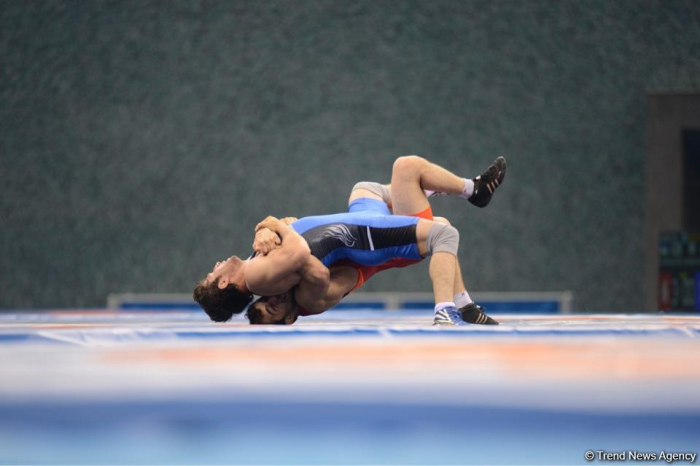 As such, the Azerbaijani freestyle wrestlers Murad Hagverdiyev (45 kg) and Abulfaz Nasirov (55 kg) reached the final of the competition. On the way to the final, Hagverdiev turned out to be stronger than his opponents Eldar Asakaev (Russia), Mikita Berazun (Belarus), Bahri Soyler (Turkey) and Fabian Niedzielski (Poland), while Nasirov defeated Harvey Readings (UK), Bezkhani Barsonidze (Georgia) and Magomed-Emi Eltemirov (Russia).

The representative of Azerbaijan in the Greco-Roman wrestling Farid Sadikhli (45 kg) also reached the final of the competition, emerging stronger than his opponents Andrea Matino (Italy), Davit Gvasalia (Georgia) and Maksim Gurov (Russia).

Another Greco-Roman style wrestler Nihat Mammadli (55 kg) defeated Olivier Skrypczak (Poland) in the 1/8 final, but lost to Romeo Beridze (Georgia) in the 1/4 final. Mammadli will be participating in consolation meetings.

Competitions in both freestyle wrestling and Greco-Roman wrestling in weight categories up to 45 and 55 kilograms are being held on the first day. The wrestling competitions will last for three days.

The festival will be attended by 3,900 athletes from 48 European countries. 52 percent of the participants are males, and 48 ​​percent are females. Athletes will compete for 135 sets of medals. A total of 930 medals are prepared for the winners, including 300 gold, 300 silver and 330 bronze medals.

Some 122 athletes will represent Azerbaijan at the festival.

In each of these sports, Azerbaijan will be represented by 18 athletes. In addition, 12 athletes in judo, 4 athletes in rhythmic gymnastics, 6 in cycling, 4 in tennis and 6 in swimming will compete for medals. In team sports, 12 athletes are included in each of the country’s volleyball and basketball teams. Each men’s and women’s handball team includes 30 players.

More than 2,500 volunteers will be involved in the festival.