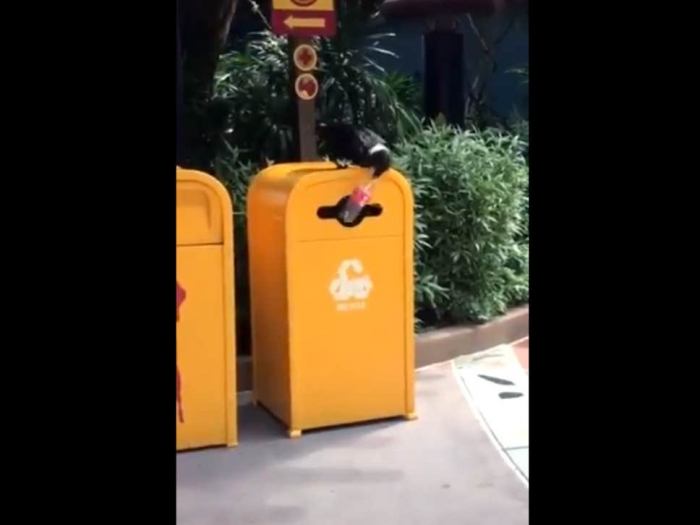 A remarkable viral video shows a raven collecting an empty plastic drinks bottle and taking it to a recycling bin where it deposits it before flying away, leaving the world a slightly tidier place.

The white-necked raven was seen doing its bit for the planet at Disney’s Animal Kingdom in Florida.

But rather than responding to its own sense of outrage about the level of human litter plaguing the environment, the bird had been trained to perform the action, corvid expert Kaeli Swift said.

Writing on Twitter she said: “The idea that corvids can be trained to pick up and dispose of garbage is no surprise.

”You might have a dog, or have seen dogs trained to put their toys away, for example. This is hardly different from training that.”

The raven in question is not the first to have been taught to recycle.

In 2018, it emerged that six crows at French theme park Puy du Fou had been taught by to recycle in an effort “to educate visitors to respect nature”.

“The goal is not just to clear up, because the visitors are generally careful to keep things clean, but to show nature itself can teach us to take care of the environment,” the resort’s president Nicolas de Villiers previously told The Independent.

Another raven taught to recycle at the World Bird Sanctuary in Missouri found internet fame on Sunday after biological psychologist Dan Quintana reposted a video alluding to Joseph Jastrow’s famous optical illusion containing a rabbit and a bird.

Curator of bird training at the World Bird Sanctuary, Paige Davis, explained the process of teaching a corvid to perform such a task.

“Training this behaviour starts with small steps, making sure the bird is comfortable with the items first. Rewarding the bird for picking up the bottle, for accidentally dropping in into the bin, and then shaping the behaviour.

“Our training at World Bird Sanctuary is focused around positive reinforcement, so our birds get their favourite treats for choosing to recycle. If the birds don’t want to do something, they don’t have to.”

“Corvids are so intelligent. It can make training them more difficult because they may outsmart their trainers. I enjoy the challenge of coming up with new fun things for our corvids to do, even though the training sessions don’t always go the way I anticipate.”

Ms Davis explained that corvids’ natural behaviour of caching also lends an incentive during such training.

Caching is a term describing the way animals hoard objects. When corvids cache, they hide food, and sometimes non-food items like stones, usually in a crevice that can’t be seen, said Professor of Comparative Cognition at the University of Cambridge, Nicola Clayton.

Referring to efforts in combatting climate change Professor Clayton said: “It’s interesting that it’s a corvid that’s doing this because of all the non-human animals studied by scientists, they’re one of the very few to have sophisticated planning abilities.

“It would be brilliant if we could encourage all animals we share the planet with, especially human beings, to clear up after themselves and it’s certainly interesting the idea of planning and saving our planet.”