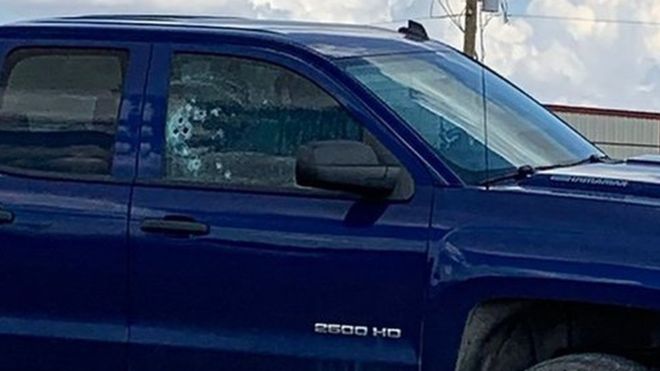 At least five people have been killed and many more injured in the second mass shooting in the US state of Texas in a month.

First to be shot was a policeman who stopped the gunman's car between the cities of Midland and Odessa.

The gunman went on to shoot at numerous motorists and passers-by. At one point, he abandoned his car and stole a postal truck before continuing his spree.

He was shot dead by police at a cinema complex.

The motive of the gunman, who was white and in his mid-30s, was unclear.

Four weeks ago, 22 people were killed by a gunman in the Texan city of El Paso.

About 20 people were injured in this latest incident, three of them police officers - although the police said not all of them were shot. Some were cut by glass when their car windows were hit by bullets and shattered.

Odessa's Medical Center Hospital said a 17-month-old boy was struck in the face with a bullet fragment and airlifted to hospital. Seven other patients were in a serious condition.

The driver then opened fire on the officers before driving away. He then began shooting at other people in several other locations.

Texas Attorney General Ken Paxton said in a statement that he was "horrified to see such a senseless act". Texas Governor Greg Abbott said: "We will not allow the Lone Star State to be overrun by hatred and violence. We will unite, as Texans always do, to respond to this tragedy."

In a tweet, US President Donald Trump said he was being kept informed about the shootings.

Later, Vice President Mike Pence said he and the Trump administration remained "absolutely determined to work with leaders in both parties in Congress to take steps that we can address and confront this scourge of mass atrocity in our country".

Amid a clamour in the aftermath of the Texas and Ohio shootings earlier this month for increased background checks on firearm purchases, Mr Trump had said he was "looking to do background checks".

But he appeared to reverse that position after a phone call with the chief executive of the National Rifle Association (NRS), Wayne LaPierre, saying: "I'm also very, very concerned with the Second Amendment, more so than most presidents would be. People don't realise we have very strong background checks right now."