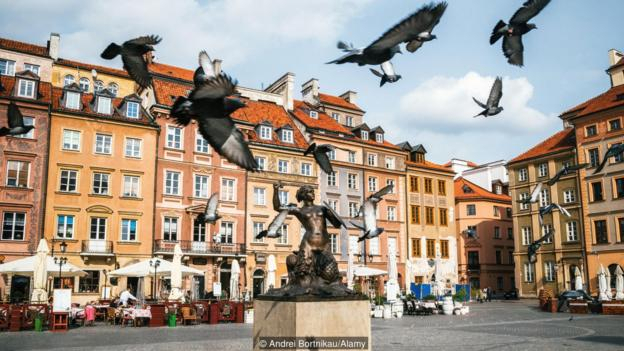 When the Nazis started closing in on my Jewish grandfather during World War Two, he made a fateful decision: he fled from Ukraine to Warsaw, where no-one knew him and it would be easier for him to disappear. When he arrived in the Polish capital, the first thing he saw was a woman selling bread at Central Station, right under a poster threatening death for doing so.

In his memoir, One Chance in a Thousand, he noted that while Ukrainians followed orders without questioning them, people in Warsaw seemed to ignore them. For him, this juxtaposition was an example of the city’s amazing ability to hustle – that is, to get things done in half-legal or not completely honest ways. In fact, Polish people – and Varsovians ­(residents of Warsaw) especially – are not so keen on rules and regulations, and the Polish language has several words to describe this trait.

Cwaniak, which means “hustler”, is a favourite way to refer to someone who is always trying to outsmart the system. There’s also kombinować (to scheme or to plot); cwaniakować (which refers to someone being cunning); and załatwić (which can be translated as “getting things done”, usually by using connections, charm or illegal means).

And although the ability to beat the system, to get things done, is held in high esteem throughout the country, as a 1963 Polish song by Stanisław Grzesiuk says, the Warsaw hustler is known as the biggest hustler of them all. 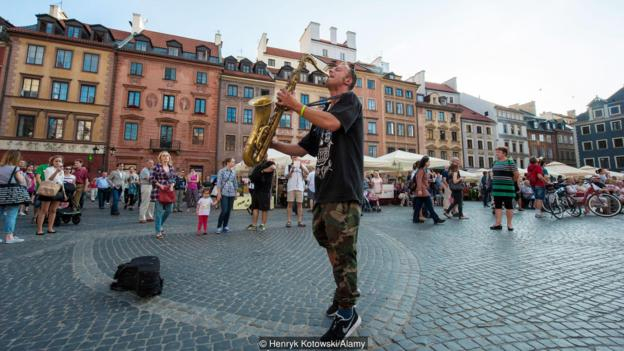 In Poland, the ability to beat the system and get things done is held in high esteem (Credit: Henryk Kotowski/Alamy)

“The word ‘cwaniak’ used to have a positive meaning,” explained Martyna Goździuk, a Warsaw guide and president of the Foundation Gwara Warszawska (Warsaw Dialect Foundation). “It was used to describe someone who can deal with life’s challenges.”

And given the city’s tumultuous history, its inhabitants had to come up with ways to survive.

In 1944, the people of Warsaw started an uprising against the Nazis. While some claim that the Warsaw Uprising was doomed from the start, many see it as proof that Varsovians won’t wait and see what happens but prefer to take matters into their own hands, whatever the consequences. Sadly, the uprising failed and resulted in hundreds of thousands of deaths, many of them civilian. Yet the Warsaw Uprising is still commemorated every year on 1 August to honour the courage, spirit and sacrifice of the people who took part.

But even before the uprising, Warsaw (and Poland in general) had a strong resistance movement during World War Two. The Kotwica is the most famous symbol of the Warsaw Uprising; it’s actually an amalgam of the letters P and W, which means “Polska Walcząca”, or “Fighting Poland”, and is still visible in numerous Warsaw buildings and streets. But there are many others, including the turtle, sometimes accompanied by the letters ‘pPp’ (“pracuj Polaku powoli”, literally meaning “work slowly, Pole”), encouraging Polish people to ignore orders and sabotage Nazi companies and activities. 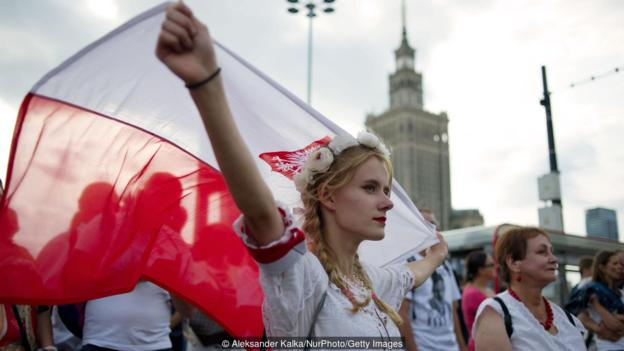 In 1944, the people of Warsaw started an uprising against the Nazis, an event that’s commemorated every August (Credit: Aleksander Kalka/NurPhoto/Getty Images)

During the war, Warsaw was extremely heavily bombed. To help visitors better imagine scale of the near-annihilation the city went through, Hanna Dzielińska, another Warsaw guide, takes them to the Old Town and asks them to find 10 old houses. Then, she asks them to close their eyes. She tells them, “We’re at war”. And then, when they open their eyes, she explains that out of the 10 houses they picked, only one and a half are still standing.

It’s a shocking statistic, and one that truly tested Warsaw’s resilience. Many Varsovians were forced out of their city. Those who decided to return were also the most determined; they were willing to work hard to start their lives anew in a city that had been totally destroyed. “We can call them a hustler, someone sly and clever like a fox, or we can call them attached to their birthplace. It’s all about the mindset,” Dzielińska said.

The destruction of Warsaw was so complete that the post-war authorities thought about moving the capital to another city, since re-building a town on this scale had never been done before. But the people of Poland, my grandfather among them, took matters in their own hands. There were hordes of people arriving in Warsaw, desperate to start anew, and when they arrived in the ruined city, they started rebuilding simply because they needed somewhere to live, despite the fact that the authorities were against it. The work became more organised, and eventually turned into a big push to rebuild the capital. 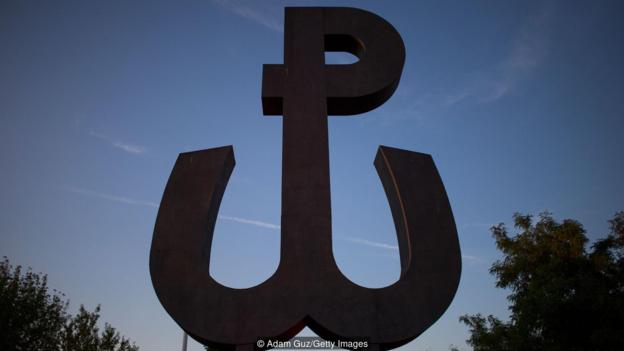 Symbols of the Warsaw Uprising, including the Kotwica, are still visible throughout the city (Credit: Adam Guz/Getty Images)

In 1945, the Warsaw Reconstruction Office was founded and took over the rebuilding of the city, using old city plans as well as 18th-Century paintings by Italian artist Bernardo Bellotto who then acted as court painter of the Polish king Stanisław II Augustus Poniatowski. Residents literally rebuilt their city with their own hands, clearing debris and using bricks and stones from destroyed houses in Warsaw – and occasionally from other cities – to restore the city’s Old Town to its former glory.

Moreover, the idea to rebuild an entire city went against the architectural thought of the time. Other cities that were also destroyed by the war, in Italy, Germany or France, decided to rebuild only individual, most important buildings. But Warsaw went big. Now, Warsaw’s Old Town is a Unesco World Heritage site.

The next generations of Varsovians are still reminded of the reconstruction effort as they go about their day around the Nowy Świat, the city’s most prominent street, where the words “The entire nation builds its capital” are chiselled in big letters on one of the buildings.

To Dzielińska, being a Warsaw hustler is mostly about contrariness. “If you destroy our city, we’ll rebuild it and it will be twice as good as it was before. If a Varsovian doesn’t like something, they’re going to resist. They won’t just agree to something,” she said. 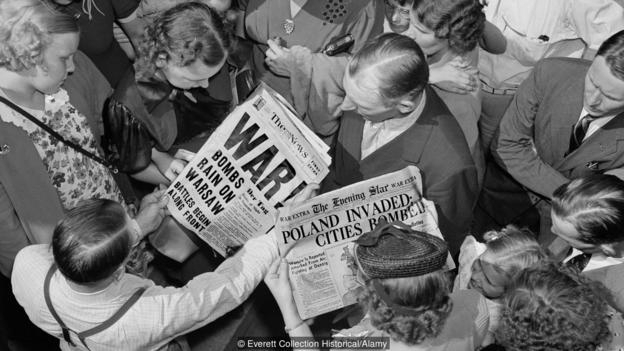 During World War Two, Warsaw was heavily bombed, and Varsovians who returned were willing to work hard to start their lives anew (Credit: Everett Collection Historical/Alamy)

This contrariness was also visible in the Polish resistance against communist rule (1947 to 1989). While it was a time of censorship, food shortages and often arrests for the smallest of misdeeds, Poles reacted to their new, absurd reality with humour and flair, especially in Warsaw. Cabarets, such as Salon Niezależnych, flourished under the new regime, poking fun at politicians, censorship and the new regime in general. “Being a Warsaw hustler has to do with being smooth, confident and relaxed. It’s about facing adversities in a way that’s natural. We’ll smile and we’ll talk. We’ll charm anyone,” Dzielińska added.

Communist rule was over by 1989, but the city’s troubled history has left its marks on Warsaw that remain to this day.

It’s about facing adversities in a way that’s natural

Even now, the Polish capital can be a challenging place to appreciate for tourists, who often describe it as sad and grey. But, as Dzielińska points out, this is not fair. Because these traits are exactly what makes Warsaw stand out compared to its possibly prettier counterparts in Western Europe with less-turbulent histories.

“There are cities where there’s beauty wherever you look. And you don’t have to work to appreciate those cities because the beauty takes care of everything. And then there are cities like Berlin, like Rotterdam, like Warsaw, where the soul of the city is not in richness and splendour. These cities are more challenging, more demanding,” Dzielińska said.

And, as a proud Varsovian myself, I wholeheartedly agree. 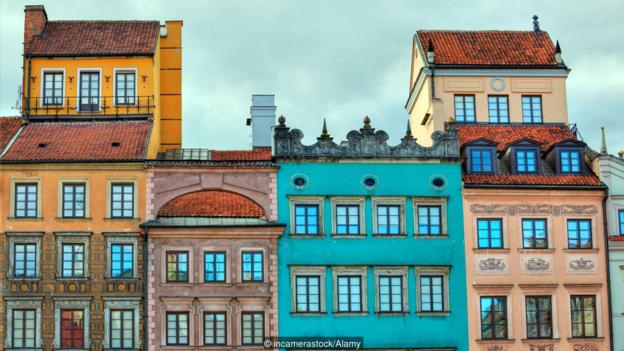 Luckily, Warsaw has been slowly but steadily shedding its dreary image. Dzielińska says her clients are often pleasantly surprised by the clean, tree-lined streets and well-developed public transport system. And once the first negative impressions are broken, visitors are duly amazed. Many find it hard to believe that Warsaw’s Old Town was rebuilt almost from scratch. But, of course, there is much more to see in Warsaw. From the beautiful Łazienki Park, which hosts the International Chopin Piano Competition, to museums such as the Warsaw Rising Museum or POLIN Museum of the History of Polish Jews, Warsaw is well worth a visit.

And Varsovians themselves are learning to appreciate their unique city all over again. Recent art projects such as Projekt Warszawiak, a band that gives old Warsaw songs a modern twist, are wonderful examples of that. Most recently, their cover version of Grzesiuk’s song, There is no Hustler Slicker than a Warsaw Hustler, has proven extremely popular.

The city has a lot to be proud of, and not just because it rose from the ashes after near-total destruction, followed by years of communist regime. “As a guide, you need to find a modus operandi that will make someone say about a city that’s not objectively pretty, ‘this city has been through a lot’,” Dzielińska said.

Her clients often ask her, with amazement, “What do you mean this was all gone? You’re heroes,” she added.

I like the idea of being a hero. But I think I prefer hustler.