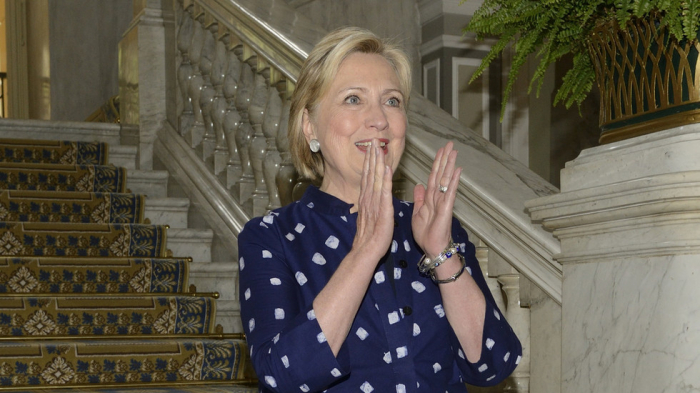 Failed US presidential candidate Hillary Clinton has finally made it to the Oval Office – a replica, anyway – making an appearance at a bizarre Italian art show along with 62,000 pages of her emails, which she continued to defend.

Clinton reached out to artist Kenneth Goldsmith, whose solo exhibit “HILLARY: The Hillary Clinton Emails” opened at Venice’s Despar Teatro Italia this week, a few days before her visit on Tuesday in what the show’s curator initially thought was a prank. The installation features a recreation of the Oval Office, complete with Resolute desk, and printouts of 62,000 pages of Clinton’s emails, which she notoriously (and illegally) kept on a private server in her bathroom.

Hillary Clinton spent an hour yesterday reading her emails at my exhibition of all 62,000 pages of them in Venice. She is pictured here at a replica of the Oval Office Resolute Desk, stacked with her emails.

Clinton sat in the “Oval Office” for an hour and read selections from the emails, emphasizing to anyone who would listen how “boring” the messages were that had been published by WikiLeaks in the run-up to the 2016 election.

“This exhibition is further proof that nothing wrong or controversial can be found on these emails,” she told local media, gushing that the show “makes them accessible to everyone and allows everyone to read them.”

They are just a bunch of boring emails.
Goldsmith was delighted that Clinton had made an appearance, describing his work as “a way to allude to an alternative world that will never exist” and framing it as “an act of tribute and love” for the former secretary of state. He spent two years trying to get a gallery to show the material, he told Artnet back when the exhibit opened in May, claiming “people were too scared.”

“It’s a pile of papers, but it’s a very powerful pile of papers. It changed the course of history – of America, but also of the world,” Goldsmith said, suggesting the emails had taken on “mythical” status because viewers could only download one message at a time and thus were tempted to imagine the worst was hidden in the massive trove.

Reactions on social media ranged from aghast to amused. “All good criminals like to return to the scene of the crime, even if it’s just a replica,” one user tweeted. “Did she have a shredder behind the desk?” asked another. “Had to do a triple take to make sure this wasn’t the Onion,” remarked another.