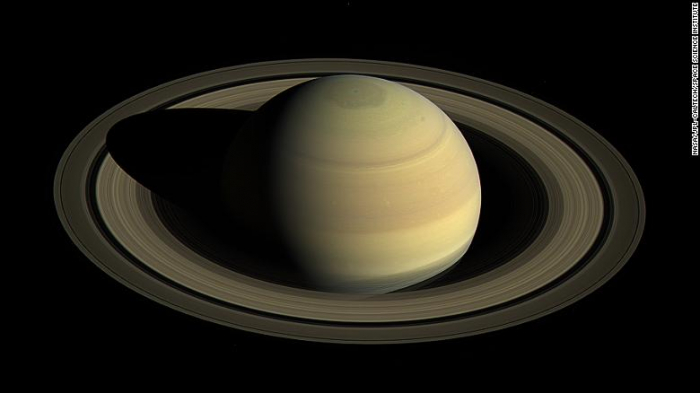 When Saturn was approaching closest to Earth this year on June 20, the Hubble Space Telescope captured the view.

Saturn was 845,064,821 miles from Earth and tilted towards us, showcasing its beautiful rings in detail. Even the more faint inner rings are visible here.

Previously, we could only see views like this if a spacecraft visited Saturn.

For example, the hexagon-shaped feature around Saturn's north pole was first spotted by NASA's Voyager 1 in 1981. It's captured in the new Hubble image. The mysterious structure has no twin at Saturn's south pole. Instead, the pattern is due to the planet's high-speed jet stream, according to the Space Telescope Science Institute.

And the hexagon is larger than it looks -- four Earths could fit inside it.

But Saturn's appearance varies. Some features come and go, like a large storm by the north pole spotted by Hubble last year. This year, it's nowhere to be seen. But a super "thunderhead," as astronomers call them, is visible in the center of Saturn.

Just like Earth, Saturn goes through its seasons as well. Hubble spotted Saturn during its summer. The planet's vivid amber color is due to a smog-like haze occurring during its summer where solar ultraviolet radiation creates reactions in the atmosphere.

And much like on Jupiter, the colorful bands are due to differently composed clouds driven by winds to stack at different levels.

But the seasons last a little longer here, like in "Game of Thrones." Saturn's seasons can last over seven years.

Each year, the Hubble Space Telescope spends some time looking at the outer planets of our solar system. In late June, during one of these observation periods, Hubble also took a stunning detailed portrait of Jupiter.

Hubble participates in the Outer Planet Atmospheres Legacy program, and these images of the outer planets help scientists study the giant planets and their atmospheres. In turn, this enables them to learn more about Earth's atmosphere as well as those that may exist on exoplanets, those outside our solar system.