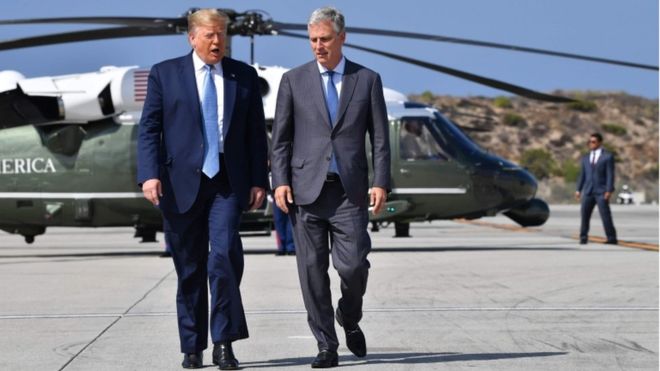 Robert O'Brien has had a long career in foreign policy working for both main US parties and currently heads hostage negotiations at the State Department.

As top adviser on national security, Mr O'Brien will be tasked with tackling everything from immigration policy to heightened tensions with Iran.

The president and his new appointee spoke with reporters on Wednesday morning in Los Angeles.

"Robert has been fantastic," Mr Trump said, praising Mr O'Brien's work with hostages. "We know each other well."

Mr O'Brien said it was a "privilege" to take on the role.

"We've got a number of challenges but there's a great team in place," he said. "I look forward to working with them and working with the president to keep America safe and continue to rebuild our military."

Mr O'Brien follows Mr Bolton, HR McMaster and Michael Flynn in the role, which does not require confirmation by Congress.

The new national security adviser trained as a lawyer then went on to advise Republicans on foreign policy and has served in various government roles.

Former President Bush appointed him in 2005 to serve as a representative to the UN General Assembly.

While at the UN, he worked with Mr Bolton, who was then the ambassador. He has also worked for former secretaries of state Condoleezza Rice and Hillary Clinton.

A former Obama administration official was among those who celebrated the appointment of Mr O'Brien.